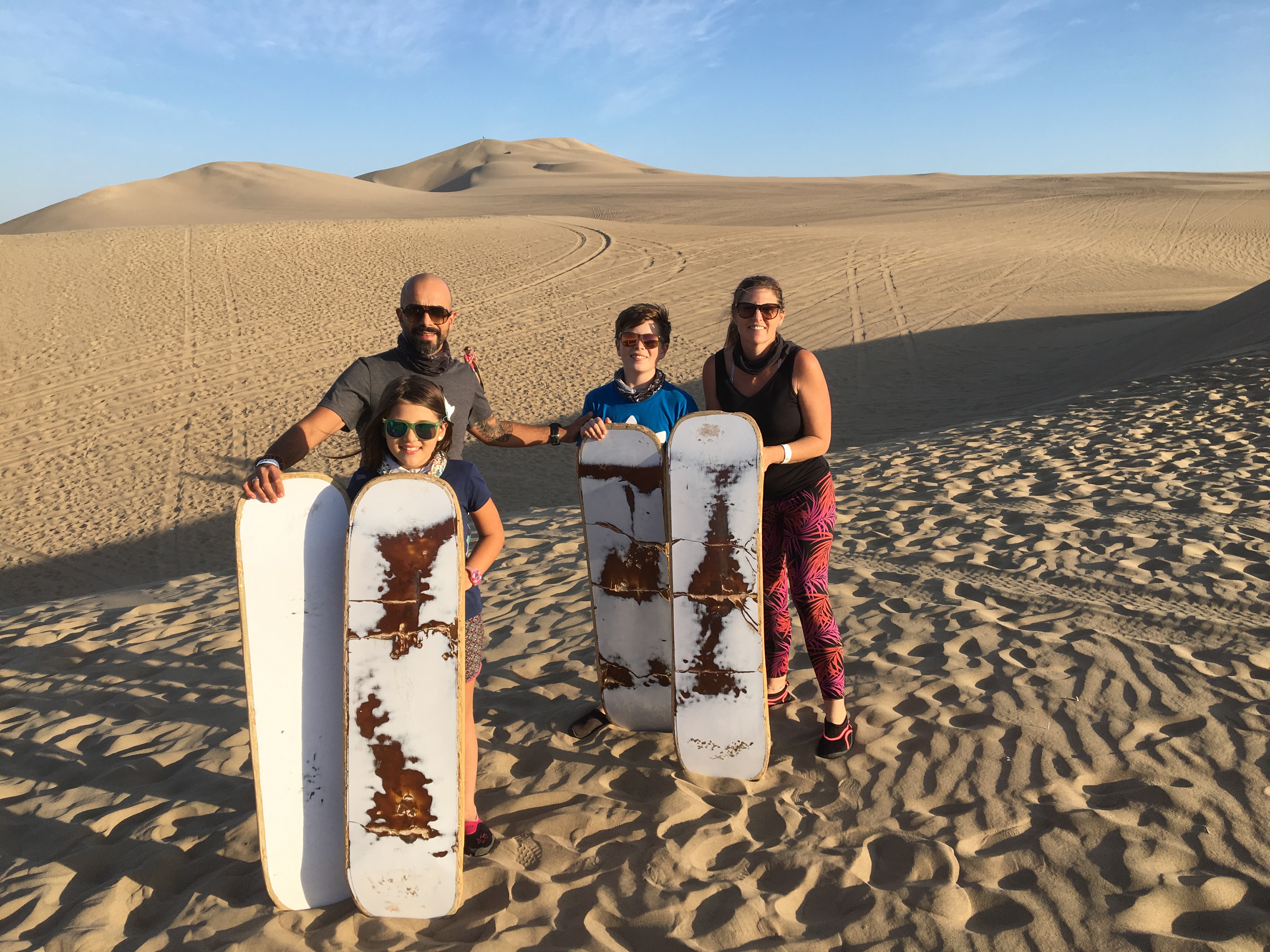 To the left there was a vast expanse of arid land with huge sand dunes dotted about, to the right there was the Pacific ocean in all its raw splendour; no manicured beaches, no hotels, just a random shack every now and then. These were our first views of northern Peru after our crossing from Ecuador. It was baffling to think how people live in this baron area as there was nothing for miles around.

As we approached civilisation, the desert scenery soon turned into a very smoggy, polluted setting; with unfinished buildings, blackened by the fumes from the hundreds of old vehicles clogging up the roads. Lima wasn’t as I’d expected it to be, but as we snaked and hooted our way through the peripheral traffic and the less populated suburbs we entered the very picturesque neighbourhood of Miraflores.

A rumble in Lima

In autopilot, we went through the ‘arrive in new country’ motions; currency, sim card, laundrette, supermarket and (for me at least), figuring out the closest local football club and the chances of getting to a match! Sightseeing was courtesy of a morning run, encapsulating the well manicured little parks along the coastline, the immaculate side walks and even a chance meeting with  Paddington bear.

Our first night we hit the hay early, exhausted from our 30 hour bus journey. In what seemed like the middle of the night, both Becky and I woke up with the walls of the room and our beds shaking. Half asleep we pulled ourselves out of bed, agreed it was some sort of tremor or earthquake, but nothing serious due to the lack of noise outside – asides from car alarms being set off and anxious dogs barking – and went back to bed. In retrospect we should have taken it more seriously, but we were so dog tired ! In the morning we learned that there has been a Earthquake in the jungle of northern Peru of magnitude 8 (https://en.wikipedia.org/wiki/2019_Peru_earthquake)

As luck would have it, one of the local football clubs Alianza Lima – were playing, but I was advised by locals not to go. This seemed to be the standard advice to all foreigners with regards to South American football matches, and despite there being incidents at the past 3 matches I’d attended, the trouble was easily avoided.  I ended up going with young Chilean family,  who were on a mini break, which happened to be centred around attending game. They were avid Colo Colo fans. Cool Colo is a Chilean team who has close ties with Alianza Lima since 1987, after their team had loaned players to the Peruvian side after they tragically lost their whole team and coaching staff when their plane crashed. (https://www.goal.com/es-cl/news/4771/curiosidades/2015/06/29/13156492/la-historia-de-la-hermandad-entre-colo-colo-y-alianza-lima)

The Police seemed even stricter here than my previous South American experiences, and I had to plead in my strongest British accent to be let in, as my ID didn’t match the name on the ticket I had purchased. After a thorough search and even a breathalyzer I was let into the ground.

Lima was the starting point from our upcoming mammoth bus journey all the way to La Paz in Bolivia. Peru Hop – the coach company – were a fun and extremely efficient outfit. This was set up by a couple of Irish guys who had  backpacked around South America some years ago and fell in love with Peru, and saw a gap in the market for some reliable safe transport.

The staff on the journeys were super amenable, friendly and tried to add a bit a fun to the journey. The  company also cleverly threw in a couple of ‘short tours’  to break the long journeys up.

Visiting the Galapagos Islands in Ecuador was a bucket list item. Becky had priced up deals including some specials and had deliberated whether we could justify the price, but  $8000 for 4 days was too much. Becky and I made a pact we’d go back oneway without kids..or even better when they could afford to pay for us!  We were quite excited for the boat trip from Paracas to the nearby islands, but quite frankly, that fact it was termed the poor man’s Galapagos was a fairly far fetched. This was like comparing a a fish finger to caviar!

Huacachina – Madness in the desert

Next stop was Huacachina, this little town was literally an oasis in the desert; a few bars, restaurants and hotels dotted about a huge green lagoon. People mainly came here to experience staying in an oasis, but also for the adrenaline sports; namely sand boarding and riding dune buggies. The dune buggies convened on a hill just outside of ‘town’ and sat there menacingly with motors being revved waiting for thrill seekers to get in.  They all started to leave the area and into the dessert before sunset, like a clan of hyenas on the prowl. Our driver traversed the vast plains at a proper pace. As the dunes came into sight he increased his speed and bolted up them. Our stomachs were left in mid air as the buggy dropped off the back end of the dune at a steep angle…and then it was full speed ahead to the next dune. It was hair raising stuff and we were fortunate our driver avoided some of the higher dunes due to Rico and T being in the car!

We stopped to sandboard at the top of dunes, each one increasing in steepness. Rico was fearless going down. T, managed the first one but wouldn’t go down the subsequent two so Becky sat out with her. To be honest I was pretty twitchy about going down. It was hard to curtail speed once descending down a dune and the last one was especially fast. As I approached the bottom at full speed, someone was standing, back turned, right in my line and despite efforts to change my course, I crashed right into him. I rolled numerous times in a spectacle that Ronaldo would have been proud of ,and we both lay on the sand dazed and a bit shaken before being   hollered at to get out of the way for the next crazed boarder. Despite a couple of scratches we got off lightly.

By chance a really good mate of mine, who isn’t on any social media, saw via a fitness app that I had run in Lima a few days prior. They were coincidentally in Peru and literally 30kms away, enabling them to hop in a cab and visit us for dinner and a few beers – and it was great to chat nonsense and laugh like old times.

The next couple of days / bus rides included the amazing Nazca lines, Pisco tasting, the historic town of Arequipa and finally onto Cusco. This was to be the starting point for our trek that would lead us to the prize view of Machu Picchu.