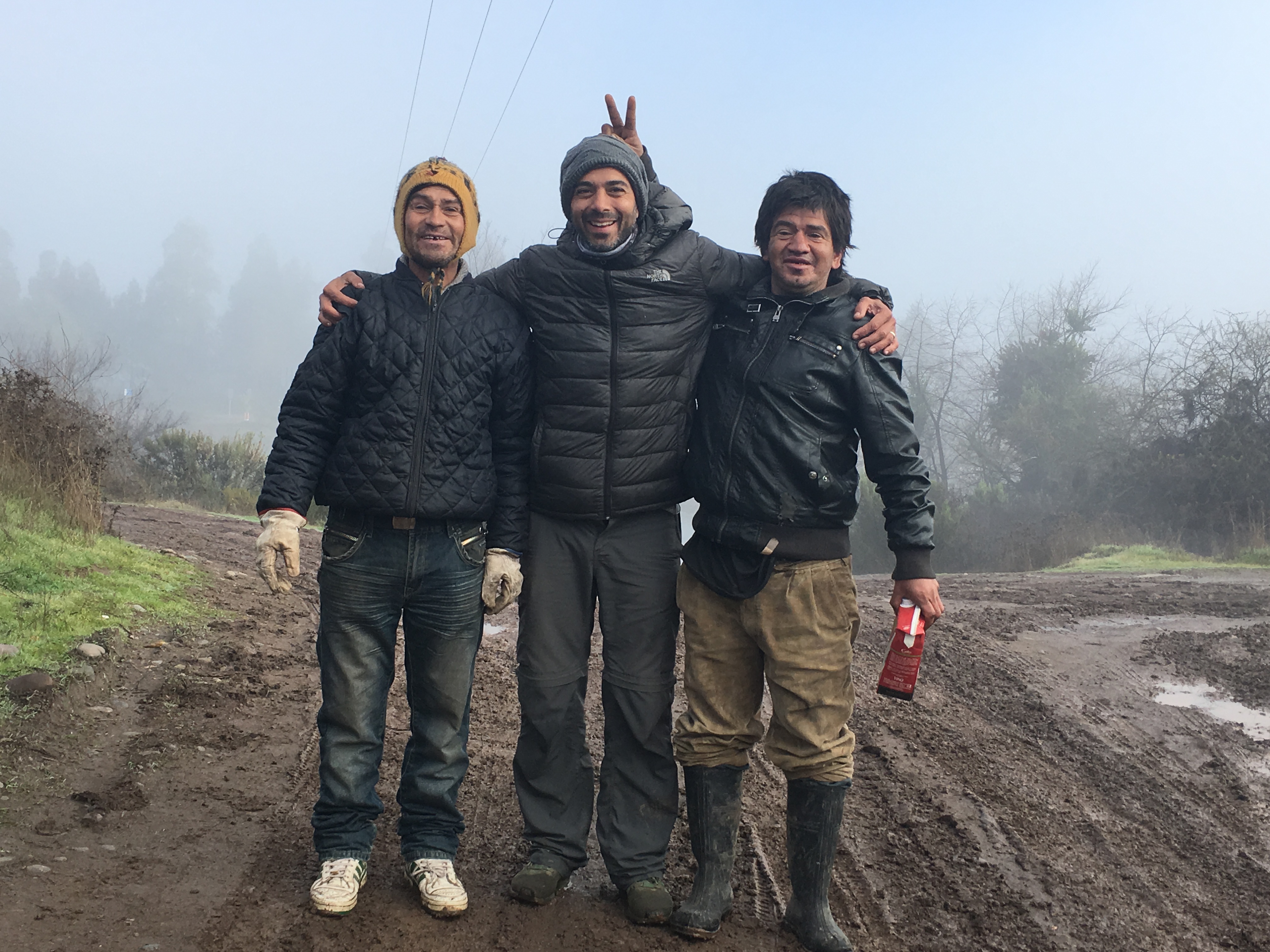 A fire to grill meat, and a large glass of wine….what was a standard weekend scene 14 months prior was now a cherished rarity – but we managed to pull it together – the perfect way to celebrate the beginning of my 46th year on Earth.

The plan was to drive from the San Pedro de Atacama through the desert to Santiago, but after receiving advice that flights were cheap to Santiago we changed our mind. In the airport we watched  and cheered on Chile in their opening game of the Copa de America with other fervent fans.

Initially we came up short enquiring for vans to hire, as people were flying in from all over the world for the solar eclipse and were hiring vans to go to the desert to witness it. It took a couple of days of planning, but soon we had our van and were negotiating the traffic of Santiago trying to head to the coast. Once past the tolls of the motorway, we were soon free spirits with just the open road and no plan.

After getting some supplies from the supermarket, we had to find somewhere to anchor up for the night. The handy app (http://www.ioverlander.com/) gave us some suggestions, but it was soon dark and we hadn’t found anywhere. Not seeing a sign, I ended up going the wrong way down a one way street, fortunately not a busy one. I flashed at an on coming car, which moved out of the way, then, when I saw another car heading towards me, did I realise I was in the wrong! The impunity I received from the oncoming cars was admirable, a far cry from the abuse I would have received in any other country. A true testament to the ‘tranquilo’ nature of the Chileans.

A  quiet dirt road next to the sea was our chosen spot for the night. We hugged the coast line at a chilled pace and the following evening ended up at a campsite in a hip surfing town.  After asking to buy some fire wood, it seemed we bought a whole tree’s worth.  When checking in, the facilities on offer were explained to us, and we jumped at the chance for a hot tub. A time had been booked, and at 8pm we made the cold 10 minute walk up a hill where our outdoor wood fired hot tub awaited us. Absolute bliss, asides from having to get out into the freezing cold night. Our first campsite experience had been fantastic, little did we know it would be our last, as all the subsequent campsites we visited were closed for the winter season!

The first hiccup of our road trip occurred the next day. Half way up a gravelly road, the van lost traction and started to slide, and we ended up with one side, slightly down the edge of the road. With everyone out of the car, I ‘gave it horns’ but the front wheels just spun. We agreed that we’d have to lessen the weight of the van, and Becky cleverly suggested we drain all of the water out of the tank.  The kids sat on the side of the road with all of our bags, as we drained all 80 litres out of the van. Next with Becky’s guidance I had to roll down the hill in order to reposition the van on the road; and then came the big one:I felt like Evil Kaneivil about to perform a stunt. Full revs, I put the pedal to the metal and gunned it up the hill. The van made it. But….I looked ahead, and ahead also seemed to be up. Whilst Becky and the kids repacked our stuff in the van I ran ahead to asses the road. It seemed steeper, so we decided we wouldn’t take the chance, and managed to find a small path to the side of the road in order to manoeuvre the van around and head back the way we came.

There was no format to our days; just cruising around, stopping for the odd leg stretch and to take in the views, and most importantly to stock up with food, water and wine (cheap in Chile). The bathroom breaks were taken at  petrol stations or supermarkets, our van came with a porta potti – but none of us fancied the job of cleaning it, so decided not to use it. As we got further in to the countryside, toilets were in short supply, so  when nature called, we had to become at one with it, and the art of the ‘boskak’ had to be mastered!!

There was a lot of procrastinating about finding the nicest site to stay for the night, but on our 3rd night we chanced upon the most scenic place that seemed if it had been set up for us (bar no ablutions!) a tiny village with a little lane and a spot to park with a fire pit right in front; looking out onto a lake with the sun setting behind it. The fire was lit, sky blood red, air clean and crisp, the meat grilled and wine plentiful. Fittingly “Nesun Dorma’ came on the speaker..I tried my best Pavarotti to hold the long notes, but ruined the moment! Once the kids were asleep Becky and I just sat by the crackling fire, in a pseudo mediative trance, enjoying the tranquility of our settings – the most indelible perfect winter solstice night.

Our aim for evening #5 was to get to a campsite as we were desperate for a shower. We sourced a campsite and after finally arriving there found the gate shut and a sign saying it was closed for maintenance. There was a municipal camping site next to it, so that was our only other option. It was a beautiful spot, but it seemed Sunday was the day locals came to race motorbikes around it’s vast field, and have a bit of a party. We found a little area away from the Sunday mob and parked up for the night. A few pots of water were boiled and the portable outdoor shower was put to use, not the best, but certainly welcome!

The weather turned the next day and our trip to ‘Siete Taza’s’ national park was aborted due to snow and gravel road – the last thing we needed was to get stuck again. It seemed that fate played a big part in us turning around. On a fairly innocuous and straight road, the car infront of us suddenly  swerved all over the place before veering off the road and ending up on it’s side in a ditch. I  slammed on the brakes, pulled the van over and Becky and I ran out to help, ordering our kids to stay inside. There were screams from children inside the car, and we opened the drivers side and pulled out a women, followed by her three hysterical children with the help of the father who managed to get free form the passenger seat. Becky and I really thought we’d be pulling out bloodied bodies, but thankfully by the grace of the powers that be, there wasn’t a scratch on anyone. More people arrived on the scene to help, and Becky took the children to the safety of our van to calm them down. It was a miracle that the car had veered off the road and got stuck in a large ridge. Anywhere else and it would have somersaulted causing unthinkable injuries to the family. Thankfully we were in the right place at the right time to help.

The rush to find a spot for the night and get a fire going ensued. I-Overlander indicated a wild camping spot, and despite the area not being the nicest, time wasn’t on our side so we decided to head there. Close by I pulled over and enquired about buying some wood from an old lady, who happened to have some pilled up next to her shop. She wouldn’t sell us less than 30kgs, so I was obliged to buy a tree’s worth. Whilst loading the wood into the van, some local winos stumbled up to us, and mumbled something inaudible. I smiled politely and nodded, not knowing what they had said, and accepted a grubby handshake.

A fire was lit and we parked up in a nice but slightly litter strewn spot. Tiana was full of trepidation that the winos would pay us a visit in the night, but I assured her they were harmless. The following morning we awoke to thick mist and the air was particularly damp. Keen to get moving we packed up, but the van was going no where. The ground where we had parked had become muddy and the tiny bank to get up onto the road was too much for our home on wheels due to the mud. The only way to get out would be to seek help. We locked up and left the van and headed into the thick mist, only having 5 metres visibility. After a few minutes a silhouette appeared in the fog, and I joked to Tiana it was one of the wino’s….and it was!! I explained our predicament to him in my limited Spanish, and he immediately came to help. Seeing that pushing wasn’t going to get us out, he said he’d go get his mate, wino #2 and off he trotted. 20 minutes passed and we assumed he wouldn’t return, but true to his word a few minutes later the wino brothers appeared! Even with 5 pushing, the van wouldn’t budge, but then miraculously a truck with 2 farmers came to help. We attached a rope to the front of the van, and with more hands to push, and the truck to pull, the van overcame the mud and we got it out onto the road. Wino #1 had spied a carton of wine on the ledge in the kitchen area in the van, and knocked on the window and gave me a thumbs up. I was happy to give it to him, and he took a huge gulp, passed it to his mate and then onto the farmers who also indulged. They really were our saviors and I slipped our wino brethren some money which, judging by the look on his face, made his day! As we drove off I told Tiana that she had learned a great lesson about how not to judge people by their appearances (or drinking habits!!).

8 days on the road passed quickly and we were soon back to civilisation. After cleaning and returning our van we piled into a taxi to get to an apartment we’d booked.  Our life as Pikeys had been fun, but it was nice to get back to a hot shower.

Two teens in the house , but to be honest Tiana ha