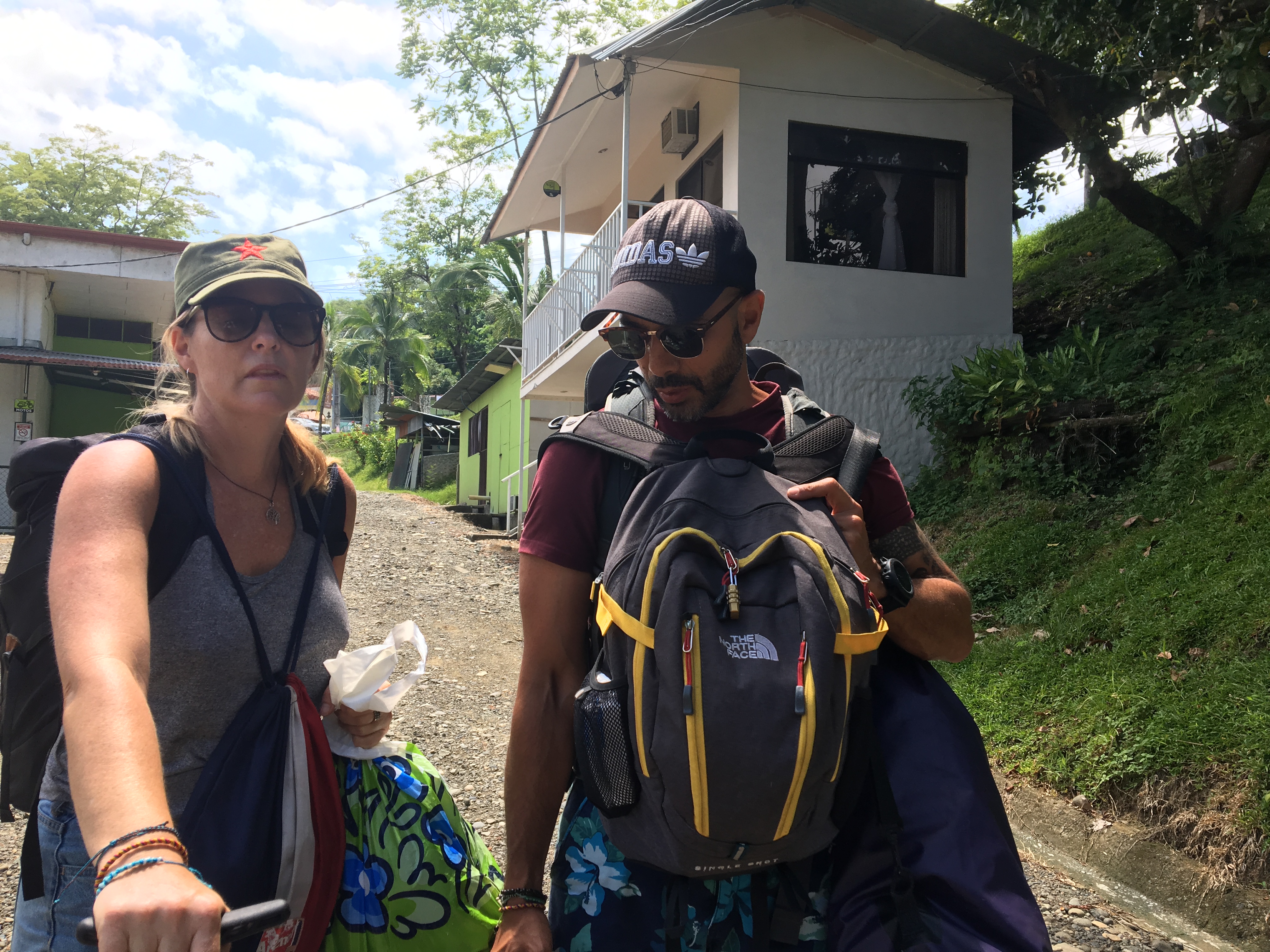 Costa Rica was a bucket list destination for Becky and I pre-children, and it was also  due to be the  first country to visit on our travels, but on neither occasion did we make it, so it was quite fitting our travels would end here.

On arriving in San Jose, we were greeted with the humidity of Central America, and made our way to our Air BnB in Alajuela; it was probably the most luxurious we’d had on our whole trip. Our interpretation of luxury had slipped far below that of our peers. We were cheap dates now: fluffy towels, a warm shower, a washing machine, nice linen, a tv, two bedrooms – was all we needed to feel like royalty!

The McDonalds big mac index is a world renowned benchmark, but through traversing the supermarket isles of the world on our travels we came up with our own indices based on: a tin of tuna, a pint of milk, a bottle of wine and a can of local beer…all the daily essentials! Our landlady directed us to the closest supermarket and we were pretty taken aback by the cost of food. It seemed our diet would have to be that of a ‘Tico’ (local Costa Rican)  – ‘Tinto’ which consisted of frijoles (kidney beans) and rice, as everything else was hellishly expensive, in fact more so than in Japan. We did learn later on that we’d been shopping in the Costa Rican equivalent of a Waitrose (UK) or Woolworths (S.Africa), but prices weren’t drastically different in the other supermarkets.

Our objective for being in  San Jose was to visit and possibly work with another football programme, SeproJoven, which educated kids on social issues using the medium of gods game- football. A key part of their work was also giving women a safe platform to play, and they had a women and girls only project called ‘Liga Fem’. The main man we needed to speak to was having some issues with an ill family member so our timing wasn’t right to discuss possible involvement with SeproJoven.

Of course no visit to a new city is complete without a trip to the local football club, but this time it wasn’t as hardcore as I’d experienced in South America – no riot police or fights! The first match we attend was a tame U23’s international match between Costa Rica and Guatemala. The second game was far more lively as it was a local derby, but there were no away fans as they were afraid of the hostile reception they’d receive from the local hooligans. It was an entertaining match, topped off with a last minute penalty winner by the home side, sending the fans into hysteria.

A good amount of insight into the sentiment of the locals, the economy and the country in general came from speaking to drivers during taxi journeys. The conversation generally starts with us being asked where we are from, and the chat traverses through  a multitude of topics including the life in South Africa and it’s economy, local food, football and so much more. Most times there are business cards swapped and on a few occasions we’ve had offers of dinner at said taxi driver’s house! Costa Rica was no different. During one  particular journey we had a women driver, a rare occurrence from our experiences. She was from Venezuela, and told us about the hardships she had faced in Costa Rica since fleeing her corrupt country with her children in search of a better life. She regaled the perils of being a female taxi driver and told us she’d been held up at gunpoint on two occasions. Our conversation ebbed and flowed and she was enthralled hearing about our story and journey. I told her we had a blog, and proceeded to reach under my T-shirt to get one of our business cards from my money belt to give her. Unfortunately the word ‘blog’ doesn’t translate well or sound good  in Spanish and her interpretation was that I was getting out a  ‘glock’  – she looked panicked and confused and her driving went a bit wayward until I produced the business card. “Que Pasa?” I asked, and with  relief she  told me that she ‘ misinterpreted the word ‘blog’ for  ‘glock’ – the firearm – and couldn’t believe that a family was going around holding up cab drivers! Her distress turned to laughter and I pretend to shoot her with the business card!

An American lady contacted me on the Help-X volunteering site after seeing our profile. She asked if we would be interesting in looking after her dogs up in the wetlands region Caño Negro near the Nicaraguan border. As luck was have it, she was in visiting San Jose and asked if she could meet with us to discuss further. We got on famously, the opportunity sounded fantastic and fitted in perfectly with our travel plans – it seemed like a serendipitous meeting.

Manual Antonio and a chance meeting

Ten days in the heat of Alajuela was more than enough, and we boarded a bus and headed down the pacific coast in search of  the beauty of Costa Rica; beaches, jungle and the biggest variety of bird life in the world. Our stay in Manuel Antonio didn’t disappoint. The heat was the same as the city, but this time we had the beautiful pacific ocean to cool us down. After spending the day at a secluded beach we’d had all to ourselves, there was a chance meeting with an uncharacteristically active sloth. In awe we watched it climb along a telephone wire and down a pole within meters from us; an extremely fortunate sighting as these docile creatures are not known for their activeness, especially during the day.

Despite the hills, the reward of a long beautiful stretch of beach made my morning runs worthwhile. On a return leg, I was running on a remote jungle path and was approached by another runner. He asked me in Spanish how far the beach was, and I recognised him instantly – it was Becky’s cousin’s husband Victor! We were aware they were in Costa Rica on holiday celebrating their 25th wedding anniversary, but the chances of bumping into them were finite. I answered him in Spanish but used his name, much to his utter bewilderment! I then watched the cogs slowly turning as it dawned on him who I was. He couldn’t believe it, and sort of staggered back in shock! Victor and I hadn’t seen each other in around 12 years. We were good running buddies back in South London, and had trained and run the London Marathon together in 2006. Another bizarre meeting thrown out by the universe.

After a few days in and around the Manual Antonio national park and the surrounding beaches it was time to head to our next volunteering gig which the kids were super excited about. Charle’s Angels dog rescue centre and it’s 23 dogs.

Two teens in the house , but to be honest Tiana ha