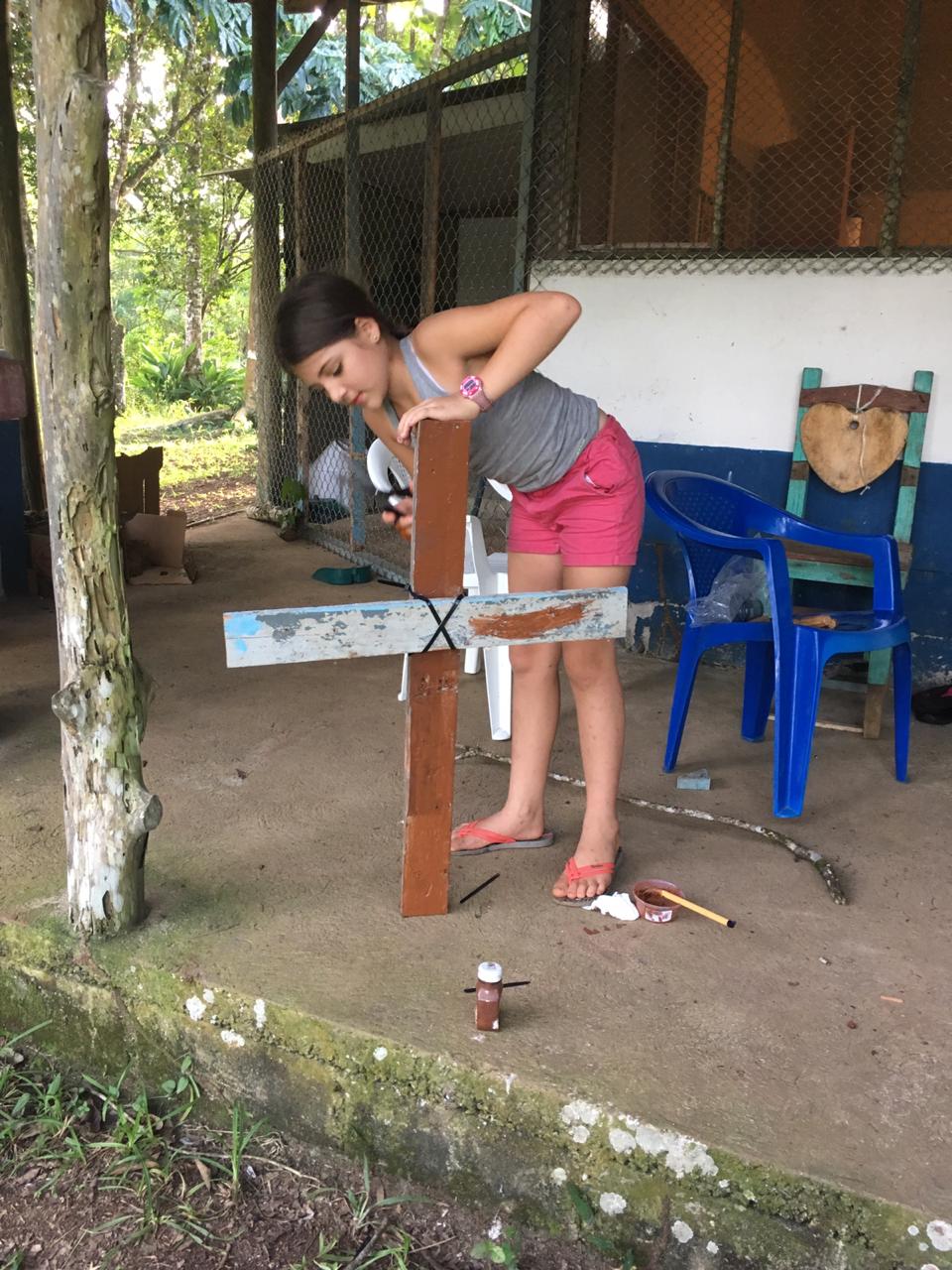 After arriving back in San Jose, we made contact with Anne regarding our dog sitting volunteering post up in Caño Negro in northern Costa Rica, close to the Nicaraguan border.  The plan was to do a big shop to load up with food,  and then all of us, including the three dogs, would drive up in her truck the following day. The old truck was packed to the hilt with us, the dogs and food goods; it was a tight squeeze but we made it work. We soon got to learn nothing ran like clockwork with Anne; she was constantly on the phone trying to be there for everyone and rushing about running errands; plans changed from one minute to the next. The plan was to leave at 11 a.m, but we eventually left at 4 p.m, which meant the tail end of the journey was driving in the dark on the very narrow Pan American highway, followed by some bumpy desolate dirt roads.  Thankfully Anne had driven these roads before and knew every curve and pothole in the road. On arrival it was hard to assess our surrounds being so dark and late at night. The four of us were in one room and Anne in the other. The kids slept on a bunk, Becky and I on a makeshift double bed. With only a small window and no fan, the room was hot and  sleeping conditions weren’t great; neither Becky nor I got much shut eye. Anne was up at around 2 a.m, arranging things around the cabin, trying to make the place more liveable for us. The cabin had been hers for a few years, and her long term aim was to move there permanently escaping the hustle of San Jose. It was definitely a work in progress!

In the morning we got a proper look at our new home. Now there is rustic and there’s RUSTIC, and this cabin was certainly the latter! The cabin was set on the a huge property on the edge of a lagoon, part of a wetlands area which was a mecca for birders and fisherman. The structure was a mixture of brick and plasterboard, and was in quite a state of disrepair. The walls were crumbling and black with mould, and the outside beams were riddled with termites.

The cabin comprised of two bedrooms and a kitchen/living room. Initially there was  no cooker, so we had to set up a two hob burner on an old broken chest of drawers in an area next to the bathroom.  Electricity was only available from two power points  in the kitchen, so extension cables were needed to  get electricity to other parts of the cabin. If a current sapping device, like a kettle, was used, the fridge had to be unplugged. We’d been told that wifi maybe available in the area soon….it was evident this wasn’t going to happen! Of course there was no washing machine, and everyday Becky washed clothes by scrubbing them with a hand brush in the outside sink – this was primitive living.

The cabin was shared with fist size cane toads, 2 inch cockroaches, mosquitos and a few other bugs. On the flip side, the setting and the view were beautiful. Our outside covered stoop was bordering on to the lagoon, so we could sit an observe the amazing birdlife butterflies and other insects. A white collared eagle graced a tree on the lagoon and kiskadees, tanagers along with morphs butterflies frequented our wetlands garden.

Anne didn’t want to waste a minute, and gave us a whirlwind  tour of the village, introducing us to people she knew and telling them to look out for us.  The whole ‘gig’ had been sold to us as this secluded dog sit in a beautiful wetlands area and that there was huge scope for us to start projects within the community. From first impressions, it was far more rustic and remote than I’d expected, and the community didn’t share Anne’s overt enthusiasm for integration into the village; they seemed quite content the way things were. The 6 week stretch ahead of us here seemed like it would be quite a test of resolve.

After two nights Anne left for San Jose, and the place was ours. Becky and I moved every piece of furniture and scrubbed the place top to bottom for about 6 hours. Books and excess odds and ends were moved to the next door storage in order to declutter and give us more space. It felt vaguely more homely, and certainly a lot cleaner. The clean had certainly kept the cockroaches at bay, and we embraced the toads as they could at least help with keeping the mosquito population down!

There were three small dogs that had come up from San Jose; Tala a maltese, Nike, Tala’s son, who looked more like a mini doberman, and Bailey a blind miniature poodle. There was also another dog at the cabin, a 13 year old collie, named Collie, that Anne had taken in only a week prior, after her owner had died.

The day after Anne left, it was clear something wasn’t quite right with Collie. She had no appetite and was very unstable on her feet. Despite some meds and syringe feeding her water, it was decided to take her to the vet, which was 1 hours drive away on a dirt road. Anne did some research and deduced that the flea soap she had used to wash Collie may have had an adverse affect on the her – it was a rare and bizarre condition with collie dogs. The vet gave her  an antihistamine injection and we brought her back to Caño Negro. We were instructed to syringe feed her milk and sugar to get her energy levels up. Becky and I took turns at this intermittently throughout the night, but there was no change the following day.  The vet said we should bring her in immediately, and after loading everyone into the truck, I turned the ignition to find the battery totally dead. I sought help at the local police station and explained the situation. This was a one horse town, and the police only had one car, which was out in a neighbouring village. The officer radioed the  vehicle and said they would meet us as soon as possible. Thankfully we only had to wait 20 minutes, and managed to successfully jump start the truck.

The vet’s  assessment was that Collie needed to be kept under surveillance and intravenous antibiotics administered due to a very high temperature. It wasn’t looking good.  The following morning Collie’s situation had deteriorated and after consultation with the vet it was agreed that poor Collie should be put to sleep. It was heartbreaking for us all. A grave was dug  for Collie and we gave her a dignified send off and place to rest in peace.

The ensuing days were hot, and the normal daily rain was no where to be seen. The heat was hard to cope with, and our energy levels were low. Asides from the shower there was no where to cool off. The mosquitos thrived, and the kid’s were covered in bites. The low water level and lilies and reeds made kayaking difficult, but we managed a couple of jaunts out. There was threat of rain with some impressive thunder but it didn’t come.  The days were long. There was no where to walk and nothing to do in the village, so we filled  the time with schoolwork, playing board games and watching movies. It had seemed a perfect place to finish off our travels; integrating into a local community, and living in beautiful surrounds in the wetlands but in reality it hadn’t lived up to our expectations.

For connection to the outside world we had to rely on data from our phones, and with the English football season in full swing, it was difficult to watch Arsenal games. I managed to watch on my phone, via a vietnamese streaming site, and I had the company of Bailey the blind dog perched on the top of the couch by my head listening to my shouting and profanities. Probably the most random circumstances I’ve ever watched football in, and even the blind dog could see Arsenal’s defensive frailties.

Somehow we had to be sanguine and embrace the good parts. The tranquility and detachment from the outside world would be longed for once we settled back into the first world again, so the focus of our stay would be to see through the negatives and enjoy the serenity and nothingness, along with the toads and mosquitos!

2 thoughts on “#56 Digging a grave, cockroaches, a blind dog and a long way from anywhere”

Some great sightings of hyenas and wild dogs today

What a pleasure to be in #krugernationalpark agai

Spring has sprung. Got to the West Coast National