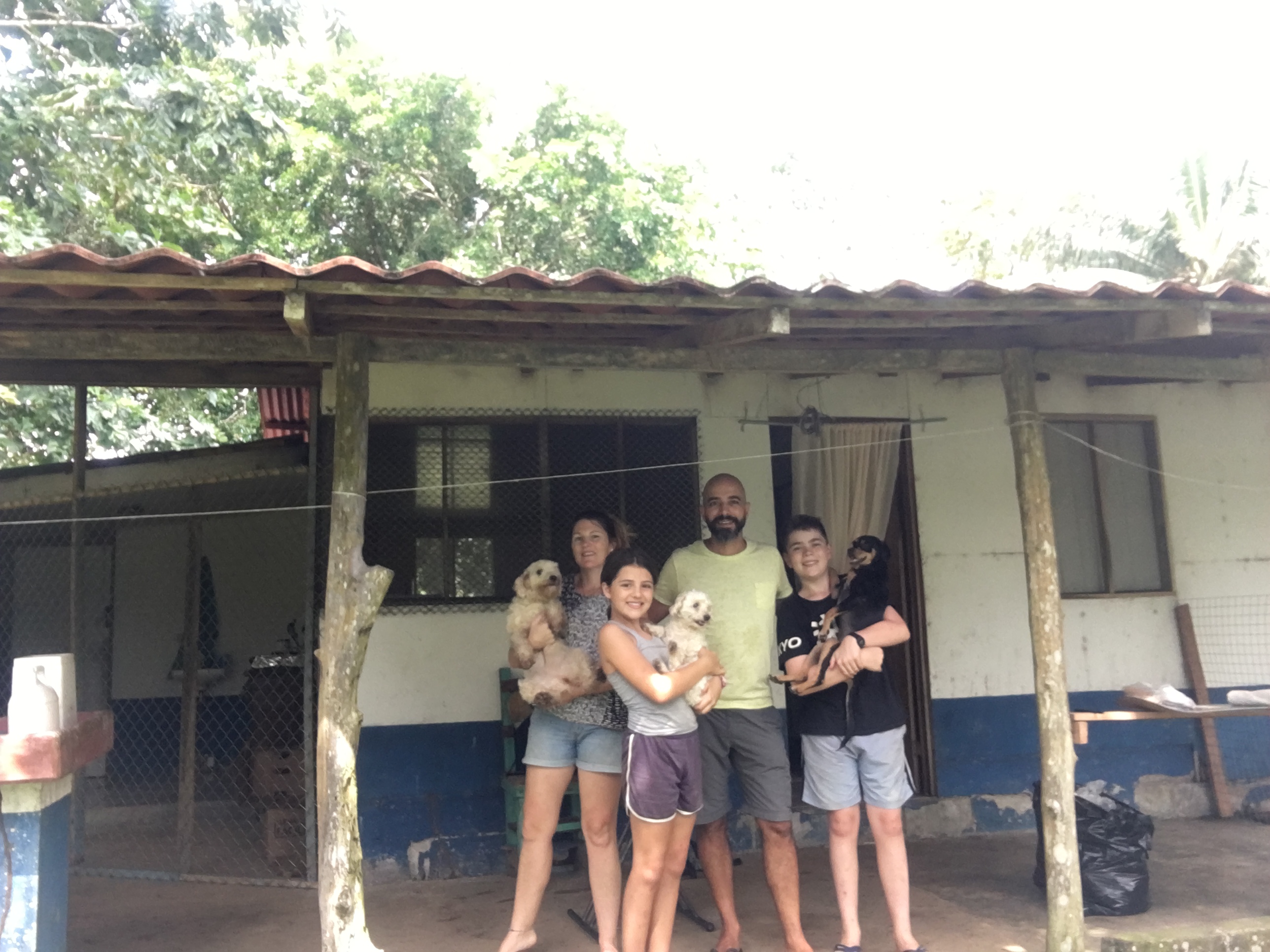 Everyone has a breaking point, and looking at the calendar on the fridge to see we had 4 more weeks in Caño Negro, was ours. The living conditions were really testing; mosquitos, damp everywhere, two small fans to blow hot air around the cabin, toads and the general grubbiness of the place. During the nights we would feel small insects on us, and the heat was hard to cope with.

We had committed to Anne to look after her dogs, and  would not renege on that, but it was impossible to live in those conditions with nothing to do for a further month. Not having lived in the cabin for a time period as long as we would be staying, it was remiss of Anne to think a family of four could manage to live there for 6 weeks, but it certainly wasn’t done with any malice. Becky, as always, came up with plan B and we packed up our belongings along with the dogs to go and stay in an Air BnB.

Upon arrival it was like a load had been lifted from us and we could breath again. ‘Casa Volcan’  was perched upon a hill facing the majestic Volcano Arenal – surrounded by a well manicured garden with plenty of room for the dogs to run around in, and not a termite or toad in sight! It was the perfect tonic for us;  amazing views, wifi and above all a clean house and comfy beds. An initial 4 day stay turned into 10 days.

We became friends with the owner’s cousin, Agustin and his wife Alejandra who ran the local ‘lecheria’.  One afternoon was spent learning about the whole process of running a dairy farm. It was hands on, literally, as we manoeuvred the cows , fed and milked them. Agustín gave us ‘fresh’ chocolate milk – coco power in a cup with milk straight from the udder; we were all little apprehensive to drink it, but it was without doubt the best we’d ever tasted.

Exploring the area was limited as we couldn’t leave the dogs too long, but we managed to get to the outstanding national park, and bath in the local river, fed by hot springs. Lake Arenal is a major attraction in Costa Rica, and on the map it looked like, despite the gravel roads, it was doable to drive the whole circumference of it. The 1990 Land-cruiser had a high ground clearance so we thought we’d be fine over any water crossings.  It was a slow drive due to the narrow gravel roads, and three streams were crossed with no issues. After driving nearly the whole way around, and with only 5km left, we encountered a river. Maybe a monster truck could have crossed it, but no way we could, so we had to go the whole way back, a good two and a half bumpy hours of it. Hot, hungry and thirsty the mood wasn’t great.

We were reluctant to go back to Caño Negro so Becky booked us a  couple of days in a slightly dodgy  area by the Pacific coast. Rain hampered most of our efforts to get out, but we still made the most of it.

Going back to the difficult conditions in the run down cabin was more palpable with an end date within reach.  Only 7 days to cross off the calendar was doable. The week went quickly and we used the favourable weather to finally explore the wetlands. It was clear to see how this was a haven for fisherman and birders. The scenery, flora and fauna were exquisite but two days were sufficient, and certainly not staying in a run down cabin!

One thing through this strange experience was the bond we’d formed with the dogs. Not being a huge dog lover, my time in South America had changed that, and these 3 dogs had really wormed their way into my heart. Despite the excitement of leaving, there were tears to leave our faithful canine companions of 6 weeks.

A hair raising 3 hours drive down the narrow roads to the capitol of San Jose to a condominium,  and the the stark reality that this epic journey of a lifetime was at an end became real. We all felt a bit flat, and discussed our thoughts about going into the ‘known unknown’ this time. Rico was just doing what most 12 year old boys do, and was a couple of chapters behind us all.! Tiana was in tears, not wanting to end our journey, looking forward to seeing some friends, but worried about fitting back into the ‘system’. It was hard to comprehend that this would be the last pack up and squeeze into the rucksacks. We’d take on our new challenges and situations with fresh eyes and a new outlook. Back to Suburbia, to take it one step at a time….