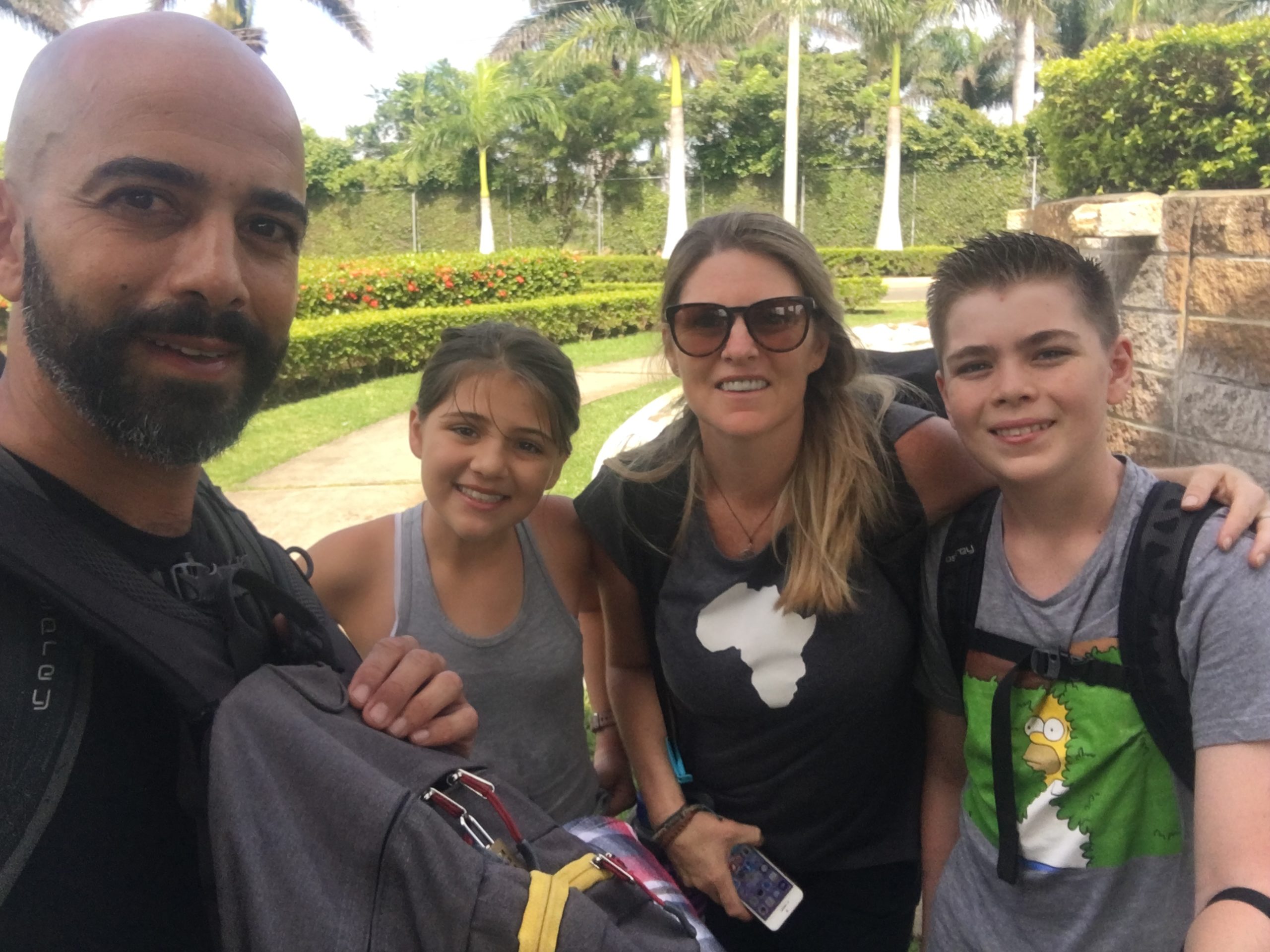 …..and just like that, the curtains to our nomadic life  descended and we exited the stage.  We were heading back into the unknown but known.

From the strange serenity of an isolated and  dilapidated cabin in the remote wetlands of  Costa Rica, we headed to England for a few weeks to be reunited with family and friends. Predictably we were greeted with  grey skies and traffic on the M25. The rain rolled down the window of our taxi. My mind, hazy from the long plane journey.  Faces, places , memories danced before my eyes to the beat of the hypnotic windscreen wipers – a picture book of the past 18 months.

Tears of joy were shed by my Dad on arrival at my parent’s house –  happy and relieved to have us back and safe. My Dad had  really struggled with our choice of life for the past couple of years, never understanding our reasoning, and worrying about the children’s education. Now he was content that we’d be returning to what he perceived as normal life.

Despite pledging that our three weeks in England wouldn’t be too chockablock  with engagements, that game plan soon went out of the window. A busy schedule ensued and the time disappeared in the blink of an eye. For the first time since I’d left in 2007, England actually felt like home. Maybe it was the quality time spent with friends and family after being away for so long. Even the grey skies, traffic jams and tube journeys seemed more palatable. As our time in England eroded, the stark reality dawned on us that our journey of a lifetime was over and suburban Cape Town beckoned.

I was ambivalent  about returning to  Cape Town, but I knew how important it was for the kids to see their friends, and for them to have  familiarity and stability. The long game hadn’t been figured out, so  Cape Town was the easiest place to make base until a master plan was hatched. The following year would also be Rico’s last before the step up to high school so it was important that he was back in the schooling system. This was also another bone of contention, as we believed our kids had fared well being home schooled despite the challenges.  How they integrated and at what level  to their peers would be interesting, but we had no qualms.

There was trepidation about the amount  of admin awaiting, but I was trying to suppress it and deal with things as they arose. Having sold our house, cars and most of our furniture, we really were starting from scratch again. Fortunately a fully furnished house was secured to rent before arriving, and coincidentally it was a couple of streets away from our previous house. It felt luxurious to have so much space again –  being able to spread out, hang  clothes up, and furnish the kitchen cupboards. Within a couple of weeks it really was ‘as you were’, and the excitement was ephemeral. The transition was fairly  seamless and it felt like we had never left suburbia.

A low profile  was kept and we  slipped in under the radar, not announcing  to anyone that we were back in order to readjust and get things sorted in our own time, without the pressures of having to socialize. Naturally word got around of our whereabouts , and slowly we started to integrate back into social circles. For me things  felt  too familiar and I found myself operating on autopilot. Even trail runs and mountain bike rides that I had craved for, didn’t quite quench the anticipated excitement from months back, things just seemed mundane compared to the constant buzz of new people, surroundings and places.

As anticipated  there weren’t  many people interested to hear about our adventures, but it was to be expected.  In the same vein our  interest in school politics, local gossip and house renovations was minimal –   our paths were just disconnected.  We had hundreds of stories to tell, but people seemed more excited about the opening of a new mall. It was as if time had stood still in this suburban bubble whilst we’d gone and enriched  our souls and filled our lungs with excitement from far away places. The adjustment was going to take more time than  I had expected.

The kids slotted back into life very easily, probably a bit too much so, but that was ok.  The lessons learned from a very simple  existence seemed to have evaporated, and their needs and wants increased, forgetting that there was no money tree, and how happy they had been with adventures instead of possessions. Despite having everything they had been longing for – their privacy, belongings and friends,  the kids seemed less happy. Their  relationship  in particular changed significantly and they argued incessantly. The togetherness and team spirit between the four of us slowly eroded.

School could not come quick enough. Our rationale behind returning in November was that we had a couple of months to get organized in order to be ready for the new school year in mid January. Unfortunately for Rico and T, we insisted they still kept up with their schoolwork and endure the wrath of Becky and I for homeschooling a little longer. Little did they know that their experience of home schooling would put them in good stead for what was to occur in March…

Once the dust settled and we became more organised,  it was nice to experience the amazing things Cape Town had to offer especially as summer was kicking in.   What a pleasure to light a fire and braai by the swimming pool – this was  uniquely South African and the  pastime we had missed the most.

Despite traveling through some very underprivileged places whilst away, the level of poverty and the gulf on the spectrum between the have and have nots  in South Africa was still omnipresent and did not cease to amaze.  There was a marked increase in numbers of people at traffic lights, handing out pieces of paper in the vague hope of securing some casual work.  It angered me watching some drivers winding their windows up,  staring straight and  not even acknowledging these people’s existence. The state owned electricity company had started their programme of ‘load shedding’ again, meaning areas would  be without electricity during certain times in the day..sometimes even for up to 6 hours. The perception was that the country had not progressed at all, in fact more  likely the opposite. A few families we knew were leaving and seeking new lives overseas.  Our  plan was to embrace the opportunities that were afforded to us, but keep ourselves liquid in case it was necessary to abscond  to new pastures.

As the new year dawned I once again found myself behind the decks at the The Duchess of Wisbeach where I’d DJ’d 2 years prior.  I remember the mixture of fear and excitement I felt back then when the new year dawned – trepidation of the journey ahead and where we’d be in 12 months. Two years and a lifetime of memories later I was back…. still having to play the venue’s anthem of Sweet Caroline!

New blazers, fresh haircuts and some pre-match nerves – the kids were ready to get back into the schooling system after being home and world schooled. Naturally they were worried about reintegration, but they’d already done presentations to their respective peers at the tail end of the year, which had given them some kudos and got them back onto the school’s radar. They got back in their groove seamlessly.

Becky found employment  very quickly, I started pursuing various projects and we had  some semblance of a routine going. I’d been in contact with a press agency in the UK regarding our story and they really wanted to run with it. Over one weekend the story hit the wires and it was covered over numerous websites and publications. It was comical reading the spin it had been given in some quarters…it made us look reckless, and naturally the internet trolls lapped it up. On the other hand it was nice to hear the amount of people who found us inspirational.

My parents came to visit from England, and we were very fortunate that it coincided with Tiana being accepted to speak at a Pecha Kucha evening Pecha Kucha #57. Watching Tiana speaking in front of 400 people about her travel  experiences, what she had learnt and how it would shape her future was amazing, and she left the stage to raucous applause and some standing ovation. She was the youngest to ever speak at this event and she really captivated the crowd. To have all her Grandparents witness this was truly special, and for my Dad especially it finally opened his eyes to the opportunity and experience we had given our children.

Things felt like they were heading in the right direction, and then in early March the world as we knew it changed forever…

Some great sightings of hyenas and wild dogs today

What a pleasure to be in #krugernationalpark agai

Spring has sprung. Got to the West Coast National