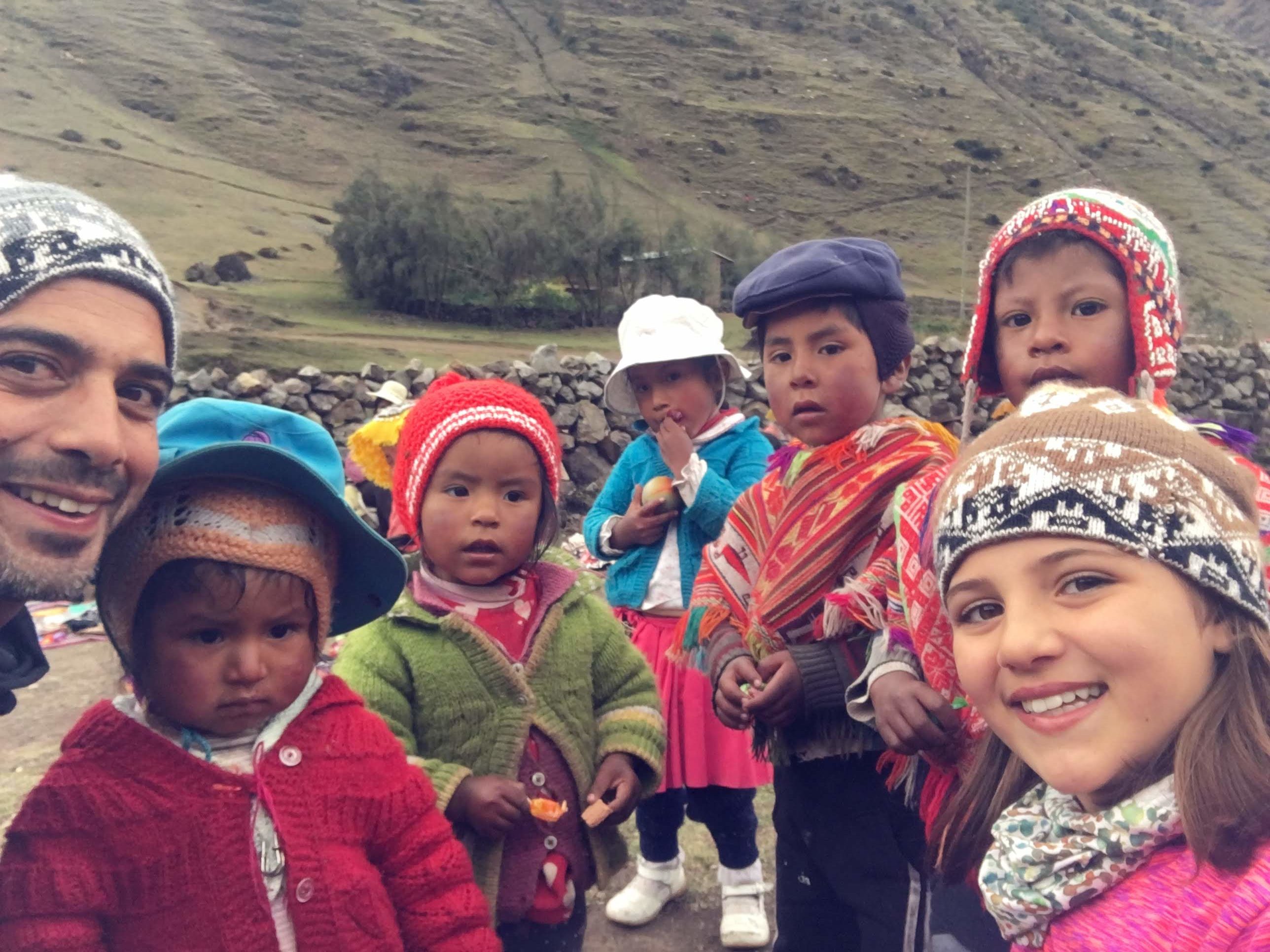 To say we knew what we were going into would be a wholehearted lie. No amount of preparation or travel reading could ever prepare us for our new chosen mode of life. During the journey a few outsiders referred to it as a ‘holiday’ – a statement which could not be further from the truth and really irked me.

Freeing ourselves from the suburban shackles, our house and belongings was both liberating and daunting at the same time. Cathartic in the fact we sold and gave away so many unnecessary possessions, but also scary that we had no home, no base, no belongings. The fear that I lived with after the sale of our house, and prior to leaving, was immense, and there were countless sleepless nights. Sheer determination, willpower and positive thinking made sure that we would make the best of this opportunity. There was never an exit plan once the jump was made, so we really opened ourselves up to the universe, held our breath and dived in from the top board.

Was this lifestyle ever going to be permanent? –  I’m not sure any of us knew the answer to that. We just felt the urge to move, explore, educate and escape the suffocation of suburbia. One day at a time we would decompress from our old lifestyle and slowly, step by step new horizons would be discovered.

Deep down I was cognisant this journey would end at some stage, but as to where and when I had no idea. We embraced the journey and opened ourselves up to situations and people, letting the universe, fate and interactions dictate our path. On reflection, things worked out very well for us. Certainly there were bumps and numerous hardships along the way (the worst was Rico being hospitalised), but we faced and conquered all of them head-on as a family, drawing from unique individual traits that surfaced as and when needed. We always kept the faith and pushed on.

Resilience is a word I’ve used a lot, but I can’t use it enough when it comes to my wife and children.

I am so proud of what we achieved and a lot of the experiences are so deep-rooted that they will come to the fore and manifest themselves in many situations throughout our lives here on in.

One of the hardest aspects of this lifestyle was the constant decision making and readjusting to new surroundings that had to be made; where to stay and for how long, where to find a supermarket, where would we wash our clothes etc. It was exhausting continually planning, and having no familiarity, but part of that was our fault for traveling too fast. In hindsight maybe we should have traveled slower and bedded down in places for longer periods of time. The amount of time spent doing research was insane. Becky was an absolute guru at finding accommodation and sorting travel arrangements…it more than made up for her lack of map reading skills!

Living out of rucksacks was particularly difficult. On the rare occasion we did stay somewhere longer than two weeks, it was a luxury to be able to unpack our clothes and actually hang them up.

Similarly, to be able to amass some food and actually have some supplies in a fridge was equally a treat. The idea of being able to relax in familiar surroundings and access a well  stocked fridge was certainly something I was looking forward to once we ensconced ourselves in a house again.

The main focus was on Mathematics and English. Mathematics is one of my geeky passions and several curriculums were followed for schooling kids. For one to one tuition, there was nowhere for the kids to hide if they could not understand a  concept.  I would try and broach a concept from different angles if the initial approach wasn’t gelling, until it sunk in. It certainly wasn’t easy and required a lot of patience, which isn’t my forté!  This is where having time, and one-on-one tutorship trumped classroom learning – in a class of 25 how many kids raise their hands to say they don’t understand something? Reading was encouraged, diary writing was a chore and died a death, so we started a blog for them to write. They also had three pieces published in the Lonely Planet which was very impressive.

Being time-rich forced the children to dig deep and be creative with whatever resources they had. Rico loves drawing and would do so for hours creating the wackiest far-out characters. Tiana could take on the world with a glue gun and used whatever she could find to make something out of nothing. She’d cut up old clothes and sow to make some avant-garde creation.

The art of conversation is dying due to social media. People can be the biggest personality behind a keyboard, but face to face a completely different person. Thankfully our journey has forced Rico and Tiana to interact, converse and regale stories and personal experiences to such a wide spectrum of people from all over the world, and they have done so with such enthusiasm and gusto. Hopefully, this will put them in good stead going forward in their lives.

Our kids have been fortunate to have lived and been enriched by so many people, places and experiences that many others could only dream about. I hope they have harnessed that thirst for exploration and to challenge what is deemed as the norm, think laterally, dream big, help make a change in the world, and above all be happy within themselves.

Becky is the strongest woman I know – I can’t think of many women that would be able to stomach the hardships and conditions we have endured. Through all of it – never a complaint. I think only once in the 17 months were there tears. Marriage is far from a doddle and being with your other half for 18 months solid sounds like a prison sentence, and I’m sure for both of us at different stages it was! Despite that, we have learned so much about each other, grown our relationship and I have so much admiration and respect for Becky,

To be with your sibling for such a concentrated amount of time certainly isn’t normal, so 18 months together were difficult.  Despite the squabbles, the bond Rico and Tiana have formed is very special, and as parents we’ve observed how they’ve had each others’ backs in situations.

I’m sad about the intimacy we will lose as we dilute our time amongst family and friends, but at the same time cannot wait to have some space. As a family we have learned to laugh in the face of adversity, and we can humour each other without offense. I’m hoping that asides from being parents we are also friends with our kids but at the same time they know where the line is and still have respect.

I feel that there has been some detachment from a lot of people previously close to us. It’s a lonely road out there, and sometimes solace was found from unlikely sources –  people we were never very close to but encouraged us to keep going. It has been an honour to be called an inspirational family and to hear that our story has encouraged some families to contemplate stepping out of their comfort zone.

We have created a million stories, memories and jokes that will be carried through many generations of Baldeos. Stories will be regaled of the crazy great grandparents that sold everything to travel the world with their kids and it makes me smile to think of that.

Funny how going back to the known seems more daunting than going into the unknown. I spoke to a friend about my fears of going back to South Africa and starting up again- his response was that I had safely taken my family around the world, not knowing what we were doing or where we’d be day-to-day, so why be scared of this? It certainly put it in perspective.

How interested will people be in our stories… probably not much? A few friends have shown genuine interest in our journey, but it’s a realisation that what we were doing was not compatible and tangible to most. Equally, I won’t be too interested in talk about house renovations or school politics. I’m sure some equilibrium will be reached, and we will find common ground again.

Was what we did, risky? … yes! But then it’s also risky stagnating and not enriching yourself, and plodding on trying to sustain a life based on other people’s and society’s perceptions, rather than what your soul desires.

No one understands the magnitude of what we sacrificed, achieved and endured – I don’t expect them to,  and will probably find it hard to relate back to certain people. I’ve never been scared of change, in fact I crave it, as I get bored quickly. Becky, on the other hand, is different from me but now she has a new found energy to explore. The children now know change isn’t always bad. Situations stagnate, sometimes you’ve got to shake things up to get fresh perspective and enthusiasm. That’s not to say you should constantly move, but be open to new things, peoples and opportunities. Don’t be afraid of the unknown. My mantra is I’d rather regret something I did, than something I wish I’d done, and I don’t regret a second of getting #straightouttasuburbia