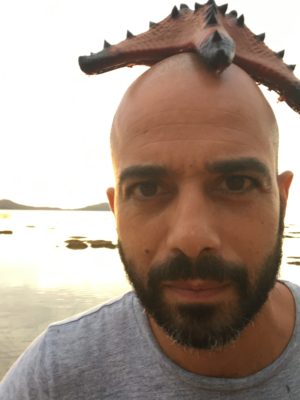 Laura and Mark’s fear was that the wound could be infected due to the primitive conditions at the small clinic at Buena Vista, and unfortunately they were proved correct. Zack’s stitches had to be undone and restitched and he was pumped full of antibiotics. He would be in hospital for a while and it looked likely that their journey was at an end. Laura came through early the following morning to collect Holly and their belongings. We had offered our services to go through to Puerta Princessa to keep them company and help where we could, but they needed to regroup as a family. It was a horrible end to a fantastic few weeks spent with this amazing family, and we all felt very down.

There were two more days in Buena Vista so we tried to make the most of them: visiting the 100 caves, la Isla Rita for the best snorkelling yet and best of all the underground river of Sabang – one of the 7 natural wonders of the world.

The last two trips we did were with a funky young German couple in their late 20’s who were also staying in a cottage next to ours in Buena Vista. We got on famously and they really hit it off with our kids who were fascinated by their extensive tattoos!   Our family and the German couple, Cindy and Sait, were quite a bizarre  pairing but got on so well and Becky and I even managed to  allay some of Cindy’s fears of not being able to travel with children.  It was interesting hearing their  views on the world, what their hopes and aspirations were and what it was like  as a young professional european couple in these intriguing  times. They were completely in awe of what we were doing, and I hope we inspired and convinced  them in some small way that all is not lost when you start a family…unless you let society get the better of you.

Coincidentally they were also heading to El Nido on the same days as us, so we bid farewell to our hosts at Buena Vista and chartered a minivan together.  Cindy and Sait decided to  change their plans and stay in the cottage reserved for Laura and her family next to us. The accommodation was a short walk out from the main streets of El Nido and run by a Swiss guy Hans and his Philippino wife Nitz.

Hans looked like one of the pioneers from the Ibiza club scene in the 70’s: small tight shorts and t-shirt, a wavy pseudo mullet and big 70’s specs. His breakfast was a bottle of San Miguel beer and a few cigarettes. He was a real character with some captivating stories.We talked about the food we missed from Switzerland and compared corruption stories for the Philippines and South Africa.

The weather was dreadful, and apparently the worst they had at this time of year for a long time. Torrential hard rain and strong winds. The kids kept the Germans entertained and we ventured into town a few times clad in our macs just for a change of scenery. Lots of card games and deep chats putting the world to rights. Cindy and Sait were only on holiday and their time was precious, so they decided to cut short their trip in El Nido and go in search of sun and diving sights in another Philippine island. We had only spent 4 days with them but they had become like  Aunt and Uncle to the kids, and apparently we’d become the same to them!