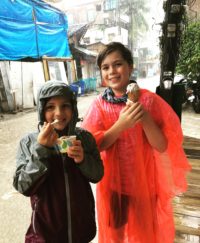 It was just the four of us again (plus the infinite amount of mosquitos) and the rain: buckets of it; so we were penned in and alternated between the bedroom, veranda and the communal dinning room. The kids caught up with school work and I managed to catch up with writing. In addition to the incessant  rain there was little to zero internet or phone access which made planning and communication impossible. ‘Brownouts’ as they are called in the Philippines, but blackouts as we know them, were common place and pretty much the norm throughout our stay; no rhyme or reason to their frequency and no warning, so we would go hours on end without electricity.

On our last full day there was finally a break in the weather and we managed to get out on a boat for an island hopping tour: the main reason we’d come to the island of Palawan. The islands were beautiful, the water visibility was excellent but the coral and fish weren’t great. After the big things expected it was a slight let down, but we were still thankful to experience the islands.

The hub of El Nido itself is small, but there is a lot of construction work going on and I envisage it to be  fairly built up and a popular tourist haunt in the next few years.

A bus journey of 5 hours led us back to our starting point in Palawan: Puerto Princessa. A quick shower and turnaround, and we had a rendezvous with Mark, Lara, Holly and Zack. They had been through hell with all the complications surrounding Zack’s foot after his accident and were far from out of the woods. You could tell it was a relief for them to see some familiar faces, as we had  become like family over the two weeks we had travelled together. Zack was overjoyed to see Rico and despite being in a wheelchair he really played down his horrific injury: a real brave boy.  Rico pushed Zack about the hotel and local mall whilst Zack barked out the orders: they looked like a little version of Lou and Andy from the British comedy ‘Little Britain’.

The following day we flew to Kuala Lumpur via a very touch and go transit through Manila that culminated in a sprint Usain would have been proud of, to make our plane. Despite receiving confirmation from the booking.com regarding the apartment we were due to stay in, we had yet to hear from the owner despite sending several emails. I called several times from outside the airport whist waiting for a cab, and then finally received the answer that the apartment was under going renovation. This was the third time that we had experienced the same scenario with booking.com, and clearly hadn’t learnt our lesson.

It was 10pm, the children were hungry and tired  from the 12 hours of travelling. I was fed up and particularly grumpy; my  vision of being slumped in-front of a TV with a couple of beers watching the first day of the World Cup was quashed, Becky and I are shouting at each other…hardly living the dream!  All round the mood in camp Baldeo wasn’t great.

We stood outside the airport frantically searching for a hotel for the night on our phones, but it appeared that every hotel in  Kuala Lumpur was booked. Reason: it was ‘Hari Raya’ (Eid), the following day, an important religious holiday in the Muslim holiday which marks the end of Ramadan ....rookie error on our part.

Eventually a hotel room that looked passable was found online and booked and we piled into a cab. The driver told us it wasn’t a great hotel or area, so he pulled into a petrol station and called up some alternatives on our behalf. The kids were fast asleep in the back as it was gone midnight whilst we drove around, and finally found a hotel, three hours after getting off the plane.

I donned my Bear Grylls hat and ventured into the night to hunt and gather to feed my family and came back laden with sandwiches and crips slain from the local petrol station. Finally I parked myself  infront of the second half of Russia Versus Saudi Arabia with a Ribina and some Pringles…not quite what I had envisaged, but better than a kick in the proverbials……living the dream?!