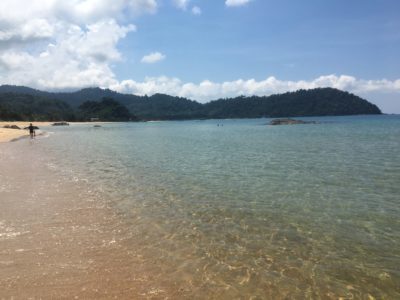 An integral part of this journey was always going to be getting involved in volunteering project work, preferably with animals, and even before leaving Cape Town, we had earmarked a turtle conservation project on Tioman Island off the east coast of Malaysia, as it ticked all the boxes: hands on, child friendly, informative and in a beautiful setting.

Mersing, a 6 hours bus ride away from KL was the gateway to Tioman Island. After finding a cheap hotel for the night, it was an early night in preparation for the 5am start to get the ferry over to the Tioman island. The journey over was beautiful, boarding the ferry in darkness and then watching the day unfold exposing the clear aquamarine waters and lush palm tree engulfed beaches coming into view. A bit of standard bartering with the awaiting taxi drivers  on arrival and we were then on our way over to the east of the island to our new home for the ensuing fortnight. The taxi driver didn’t exactly sell the place to us;  the whole journey was filled with stories about poisonous snakes that inhabited the island; telling us not to kick bunches of leaves on the floor as snakes could be lurking beneath, to watch out for snakes hanging from trees, and about the tourist who did a trek into the jungle but got lost: eventually being found after 6 days but died soon after. These jovial tales dampened the mood a bit in the car!

There was no formal welcoming on arrival, we were just shown to our room by one of the interns. To call the room ‘rustic’ would be to romanticise the term.  One double bed and one bunk bed, hardly any floor space, no hanging room for clothes so we had to live out of our backpacks, and the bathroom had a damp concrete floor due to the leaking toilet cistern, and seemed to be a breeding ground for ants. This is what we had signed up for, so we’d just have to get on with it.

The heart of the ‘Juara Turtle Project’ ( JTP) was a big covered open space, which doubled up as our information centre and communal eating space. Over the course of the day we got to meet the other inhabitants of our JTP family: more volunteers, some interns, and some permanent staff: a real mix of people – students, marine biologists, dive instructors. There were French, Scottish, Spanish, Singaporean, Germans and Malaysians. 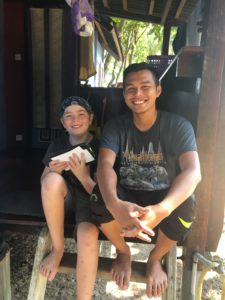 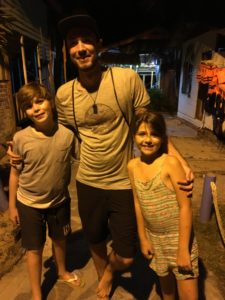 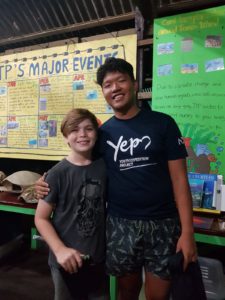 (Above) The kids with various volunteers and interns from JTP

Directly across the tiny road outside JTP were some info boards about turtles and the work being done by the project and then the actually turtle hatchery was directly on the beach. The beach….as idyllic as they come. Crystal clear water, clean sand with no rubbish, hardly any people and beautiful jungle rich foliage behind. It was hard to think this piece of paradise would be our home for two weeks. 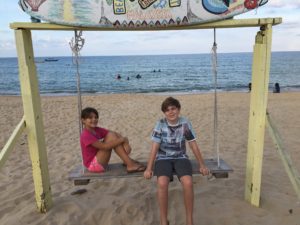 Each evening at 5pm we’d all convene in the communal area for a ‘board meeting’. Whoever hosted asked for volunteers for the various jobs and chores around JTP. There were menial jobs: cleaning the diving equipment, sweeping leaves, cleaning foot buckets, and then the turtle related jobs: checking the hatchery, beach patrols for turtle nests in the night and giving JTP tours to visitors.

After unpacking we took some snorkels and masks and endured the 30 second walk to the beach! The water was a perfect temperature, the visibility was great and there was an abundance of sea life and coral. Coming out of the sea and looking at the red sky against the beautiful green jungle it was hard to believe we were here. Within a day it  felt like this had always been our home,  the dynamics were great; everyone got on with each other, the area was beautiful and there was so much to learn, it was going to be a special two weeks. 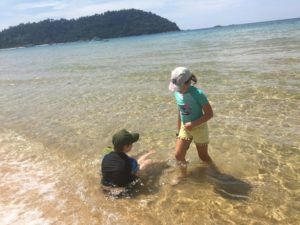