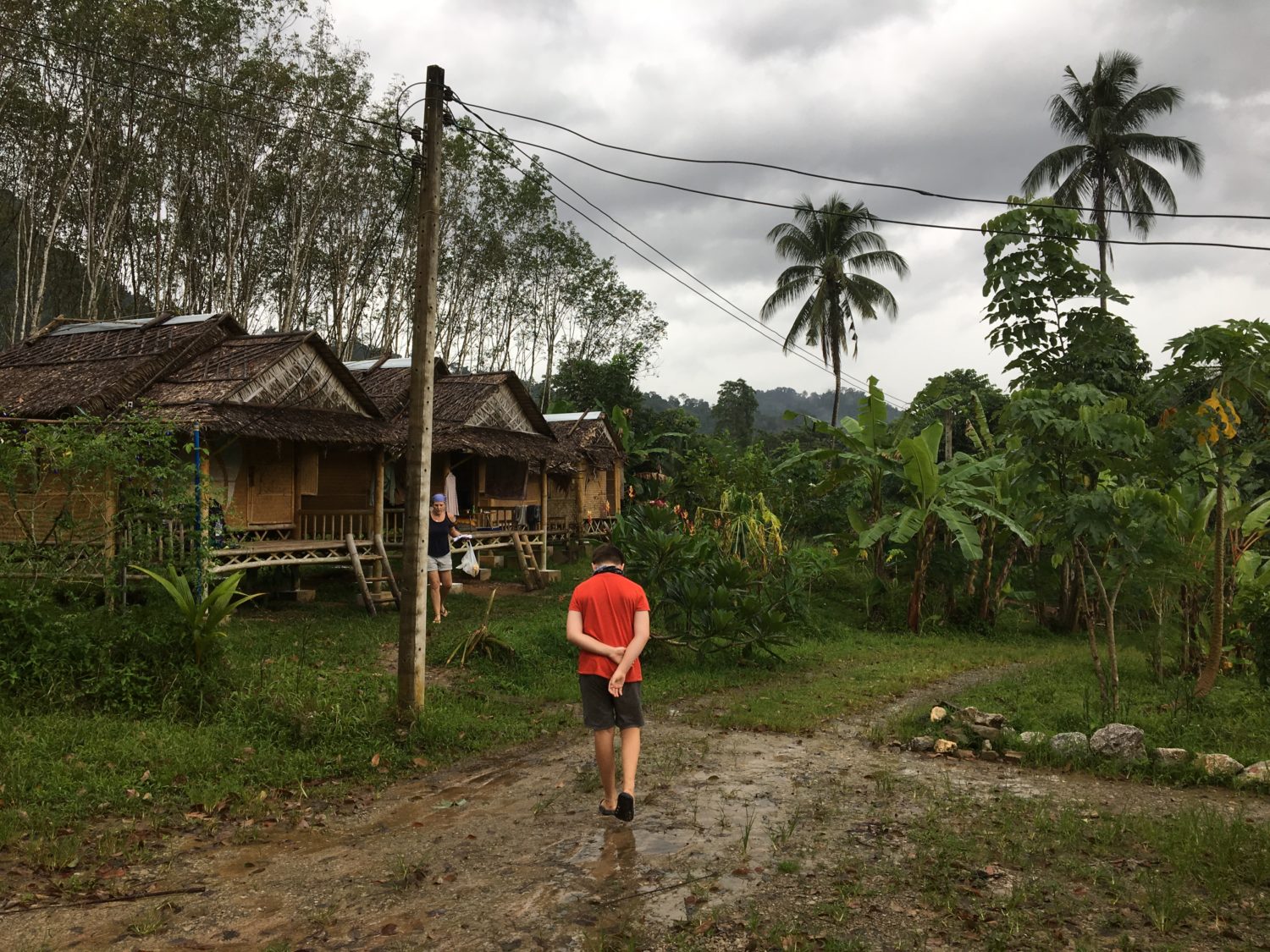 A straw poll between the whopping 4 us revealed that we were happier amongst people and doing something purposeful. The last 2 volunteering gigs had been a hit with the kids, despite the animal sanctuary being pretty intense.

A taxi took us the short 24 km journey to Gaarawé, and upon arrival no one rushed to greet us and we stood on the muddy pathway with our bags until a Spanish guy pointed to a bamboo hut and indicated that was where we were sleeping. A small bamboo hut on stilts with a 2 inch mattress on the floor and nothing else. My initial instinct was how to conjure up an exit plan, but similar to our animal shelter experience (http://straightouttasuburbia.net/26-pekan-the-animal-shelter/) I knew we’d have to tough this one out.

We went down to another bamboo constructed area where there was a kitchen, one communal shower adorned with a piece of bamboo for a shower head, a shared toilet, a couple of hammocks and a communal area. We chatted to the volunteers that were there and could immediately gauge how laid back the place was. Lele, the man behind the operation chatted to us briefly but there was no induction, and it was clear that we’d have to make the most of this opportunity ourselves.

Lele an Italian,  had run restaurants and bars in Rimini most of his life and then discovered the magic of Thailand 14 years ago. He ran bars in Phuket but came to a realisation that he needed more purpose in his life and that’s where Gaarawé was instigated. He bought some land in 2014 with the help of his girlfriend and started farming, growing all manner of fruit and vegetables and nurturing a few chickens for their eggs. His ultimate dream was to have a restaurant on site that served up the finest organic cuisine all sourced from his land and also have permanent and semi permanent accommodation for anyone who wanted to buy into his dream. It was very inspiring listening to him and seeing the excitement in his eyes when he talked about his eco utopia.

The first night in our bamboo bungalow wasn’t great. I was searching for something in my bag when I spied something out of the corner of my eye… a giant spider. It was crouching in one of the bamboo supports no doubt waiting to pounce on me and gouge my eyes out or something similarly ghastly. I shouted to Lele who was in the adjacent bungalow and told him “ I didn’t do spiders’ and I stepped out of the room whilst he dealt with it with a straw brush. Half an hour later there was another one, and I pathetically called out again for assistance. This time the offender was ushered out and I watched the 8 legged freak run out of the room. I was done. The 4 of us laid on our mattress to watch a film on my laptop but I couldn’t help but constantly scour the room and it’s bamboo patchwork for all the arachnids that were in waiting to avenge the death of one of their possee. I wasn’t disappointed, and I again called on Lele’s services; this time the spider exited through the bamboo eves. There was zero chance of sleep for me and I ensconced myself in my sleeping liner to hide from the onslaught of a thousand spiders during the night.

Rain dominated the week, but any break in the weather and we were out planting seeds, weeding, picking fruit and learning about this rich terrain from Lele and Duane – a Thai permaculturist. The kids chipped in where they could and spent  time playing with the resident dogs and chickens.

The week passed slowly, probably because we were relaxed being in the middle of no where. One of the highlights of the week was the food. Phi cooked for us, and each day she served up a plethora of amazing meals and lots of treats in between – it seemed like we we’re constantly eating. All the fruit and vegetables were from Gaarawé and dishes were sometimes accompanied by fish and tofu. No two meals were the same and we eagerly anticipated what magic Phi had conjured up when the big wicker food cover was on the table.

I don’t think many families had been to Gaarawé, and Lele enjoyed having us around as we embraced the place and understood his vision. The offer was given to us to live there permanently, but we weren’t quite ready to disappear into an eco utopia yet, but it was always a good back up plan!