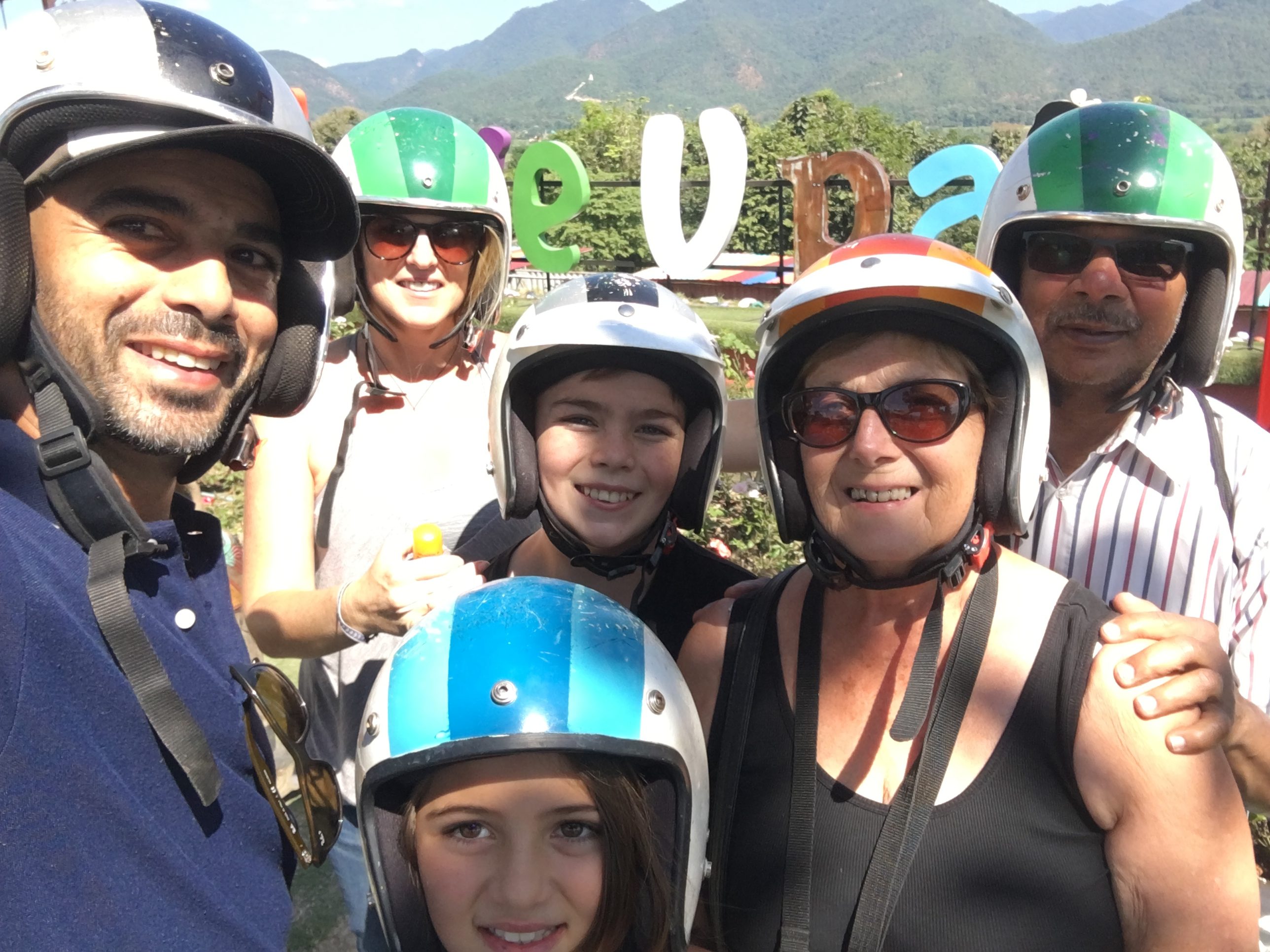 From Hoi An we had to head back to Bangkok for an appointment for further blood tests for Rico to confirm that the septic arthritis had gone. Rico had been on antibiotics for around 6 weeks, and thankfully hadn’t had any reoccurrence of the knee pain or temperatures which he had previously experienced. The paediatrician was initially concerned about the results, stating that there could be a chance that Rico had osteomyelitis. Thankfully he managed to contact a specialist whilst we were there who allayed our fears. It was a massive relief and  felt like we had really dodged a bullet. Someone had our backs.

Chiang Mai was our next destination for the much anticipated World Schoolers summit and also the visit of my parents.

We hired an apartment for two weeks, and it  was so nice to completely unpack our backpacks  and hanging up our clothes was a treat! The first couple of days were spent scoping out the area and getting our bearings. On our first night we found a wallet on the street, and Tiana took it upon herself to become a detective and track down the owner:

This was a gathering we’d been looking forward to for months. A meeting of families from all over the world who had taken a leap of faith, broken the mould and were using the world as a classroom for their children.

The co ordinator was an amazing lady, Lanie Liberty who had been world schooling and travelling with her son Miro for many years. The summit was held over 5 days, each day being packed with sessions on an array topics related to world schooling  and its many facets. The speakers were from families either well versed in world schooling  or  from parents just starting out. Interactive sessions covered topics ranging from being a digital nomad, enhancing blogs, the ethics of world schooling developing a child’s executive functions and talks from people sharing their own journeys.

Finally Rico and T could meet children in similar situations and speak to them regarding how they coped with being away from friends, school and their home. There was a full on daily kids camp schedule which they loved, and many new friendships were formed.

Miro and Lanie hosted one session to share their particular story. To hear Miro speak was remarkable. This was an 18 year old, who had been worldshooled the majority of his life, he spoke with such aplomb and wisdom far beyond his years. The experiences of his travel and world schooling had equipped him with traits that none of his peers would be able to emulate.

It was refreshing  to  download all of our struggles, apprehensions, and visions with people experiencing similar, and it was  nice to get some affirmation and to know we weren’t isolated.

There were many inspirational stories from families with children that had travelled and fitted back into the schooling system and excelled. Some families had homeschooled and world schooled their children throughout their formative years who were now trailblazers in society. It proved that education is so subjective and just because society deems it to be the norm to sit in a class of 30 students being fed information doesn’t mean it is the correct or only way of educating a child.

It was an invigorating and also emotional few days, but we left with fresh ideas and lots of like minded friends around the world.

The countdown had finally ceased and the day had arrived – Grandparents day! My parents made the journey from London via Bangkok to come and spend two magical weeks with us. We are so privileged that they are dedicated to our children and would go to the ends of the earth for them. It took them a few days to acclimatise to the heat of Chiang Mai so we took it easy.

I was dreading the inevitable chat with my Dad about when we would cease travelling and go back to ‘normality’. The conversation did arise but wasn’t as bad as I had anticipated. By spending time with the kids I think my parents could understand our decision by seeing how much they had changed and matured in the months we had been away. I assured my Dad that full-time travel wasn’t for our family and that some stability would be sought sometime in the forthcoming year, so his fears were placated just a bit!

The 6 of us left Chiang Mai, and endured the 200 km, 762 bend road to the mountain town of Pai.  My parents are still very young at heart, thankfully in good health and always up for trying something new. We weren’t keen on doing the tours that were offered to see the sights of Pai so we opted for scooters with side cars and had great fun riding round in convey exploring Pai and it’s surrounds. The evenings were spent playing cards and trying the different foods  from the stalls that adorned the pavements. These were truly special times that would be savoured forever, and there were lots of tears at the airport in Chiang Mai when we had to say our goodbyes.

3 thoughts on “#36: World Schoolers and Grandparents in Sidecars”