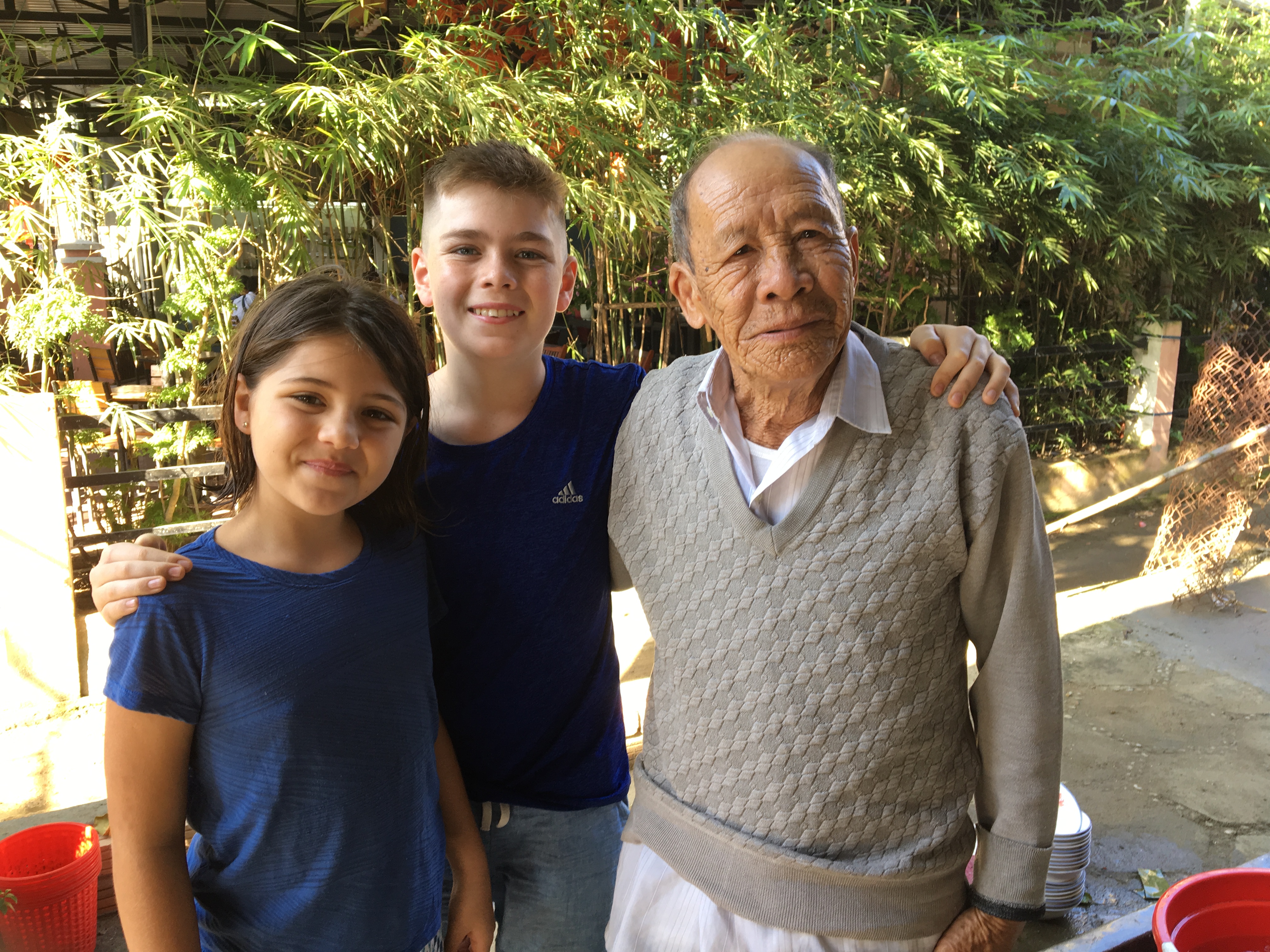 We were up at 3:30 am for a 4am cab; Dean had kindly woken up and made us coffee – I think he wanted to make double sure that we weren’t staying any longer! We were gifted with a glorious sight of Mount Fuji as we left Japan, a very fitting end to a memorable stay.

A flight to Hong Kong; 4 hour stopover, followed by a flight to Da Nang in Vietnam. There was a bit of a process for us to get our visas but eventually we got through, and had a cab waiting for us courtesy of our guesthouse. It was dusk as we left the airport; the air warm and humid and heavy rain. The cab turned out of the airport into the madness of the Da Nang roads during rush hour – noise and chaos everywhere. For the first time in months I felt quite apprehensive opposed to the normal excitement for more adventures in this vibrant country. Everyone was quiet in the car and the stark contrast of Vietnam to the normality of a first world Japan really hit us. After experiencing home life with Dean and his family, I felt anxious about all the planing ahead – maybe it was the lack of sleep or culmination of the festive period excesses that fuelled it.  The guesthouse was average and a far cry from the luxuries we’d had in Tokyo – we had landed  back to South East Asia with a thump – no more high tech toilets that warmed your bum cheeks whilst giving you a wash and dry, no more drinking water from taps; back to bum guns, bottled water, litter on the streets and stray dogs; it would take a little while to reacclimatise.

The following morning  we had to find a suitable  apartment to stay for the month. After putting out a request via the Hoi An groups on Facebook prior to arriving, I was inundated with potential accommodation options, but had to split the wheat from the chaff. The first property to view was just around the corner of our guesthouse and contact had been made via a helpful Kiwi guy, Keith, whose Vietnamese partner Chau owned three new apartments. Upon viewing, it ticked most of the boxes of our requirements and despite the plan being to view a few places before committing, we took this one on sight.

Our own apartment for a month: space to sprawl ourselves out, unpack every inch of our backpacks, hang up clothes, and have a home for a little while. Bikes were hired and we were all set.

The first few days were spent getting our bearings, finding shortcuts through the maze of alleyways between the busy streets, locating eateries and food markets. There was a very active expat community in Hoi An and the following  evening I managed to join some guys playing 5 a side football against a Vietnamese team. A painful pulled hamstring later, I wish I hadn’t.

Keith and Chau couldn’t have been more accommodating and helpful. We were taken out to breakfast for the best Phò -traditional noodle soup-  Hoi An had to offer, and it  soon became our morning staple. The kids were enrolled in a local Taekwondo school, which they were a bit apprehensive about being the only Westerners out of about 60 pupils, and also due to the language barrier. They were made to feel welcome and taken under the tutelage of a great instructor, Fletcher, who spoke perfect English. They soon became quite the attraction and popular with all the other students, and it was great to see them integrate with local children. Becky and I had time to ourselves during their tri-weekly 90 minute class, so managed to get some yoga and workouts in at the local gym.

There was some semblance of routine back in our lives. It rained a fair amount, so being house bound helped to focus on schooling and work, rather than being out and about. It was nice  being in our own confines but the moment we stepped out it was instant invigoration from the stimulation of the vibrant surroundings. Riding through the little alleyways; the smell of incense burning from little shires; avoiding dogs in the street; potholes; puddles the size of small lakes; motorbikes and scooters coming at all angles, the aromas of cooking wafting from houses and small street stalls – every trip on our bike was an experience to savour.

With the knowledge that we’d be in Hoi An for a month, it was essential to try and hook up with other families in order source playmates for our two so Becky reached out to a few of the Hoi An groups on Facebook. Some families responded; a meet up for coffee was scheduled and before we knew it we had a pretty tight knit group of mates for the month. Dads beer and a curry night, kids hook up at the beach, mums out for dinner, day trips out; it worked so well and we all clicked. Some families were long term travellers, some on a year sabbatical but all very open minded, and with similar ideals and outlook on the world – it was refreshing. The days and weeks passed quickly and the social calendar became populated, but our imminent trip to Columbia wasn’t falling into place as easily as hoped.

As our apartment was new it customary for a blessing to be made, which consisted of a big table set out at the front of the property adorned with an offering to the gods of food, drink, flowers and paper imitation bank notes. Incense was burned and once it had finished, the paper was burnt, and the food and drink was consumed.

The whole lead up to Tét – the new lunar year- was fascinating. This was the focal point of the year and the buzz about town could be felt. Lanterns were hung across the narrow alleyways, motorbikes precariously transported kumquat trees – the equivalent of a Christmas tree for this festive period- and best of all was the Tat Niens’, the year end functions. Virtually every business and household held a Tat Nien and entertained colleagues and family members; the format being beers, food and best (or maybe worst) of all: karaoke. Not being au fait with Vietnamese songs at all, I could still tell these songs were being murdered, but people had no shame in belting out a ditty or two! The parties only lasted a few hours, but people really hooked into the food, booze and karaoke. Start times ranged from as early as 9 am to about 7 pm, but it was all quiet by 10:30pm. Chau arranged one for her house, and we fully embraced it, and gave the locals some of their own medicine by slaughtering a few songs!

It was nice to be settled somewhere for Tiana’s birthday and have a little group of friends for her, as it would have been pretty miserable just the four of us. The day was a great success; a trip to a cat sanctuary, a  very sweet and generous gift of a beautiful dress from Chau, cake on the beach with her friends, and a very special surprise from us, which precipitated a lot of tears…..