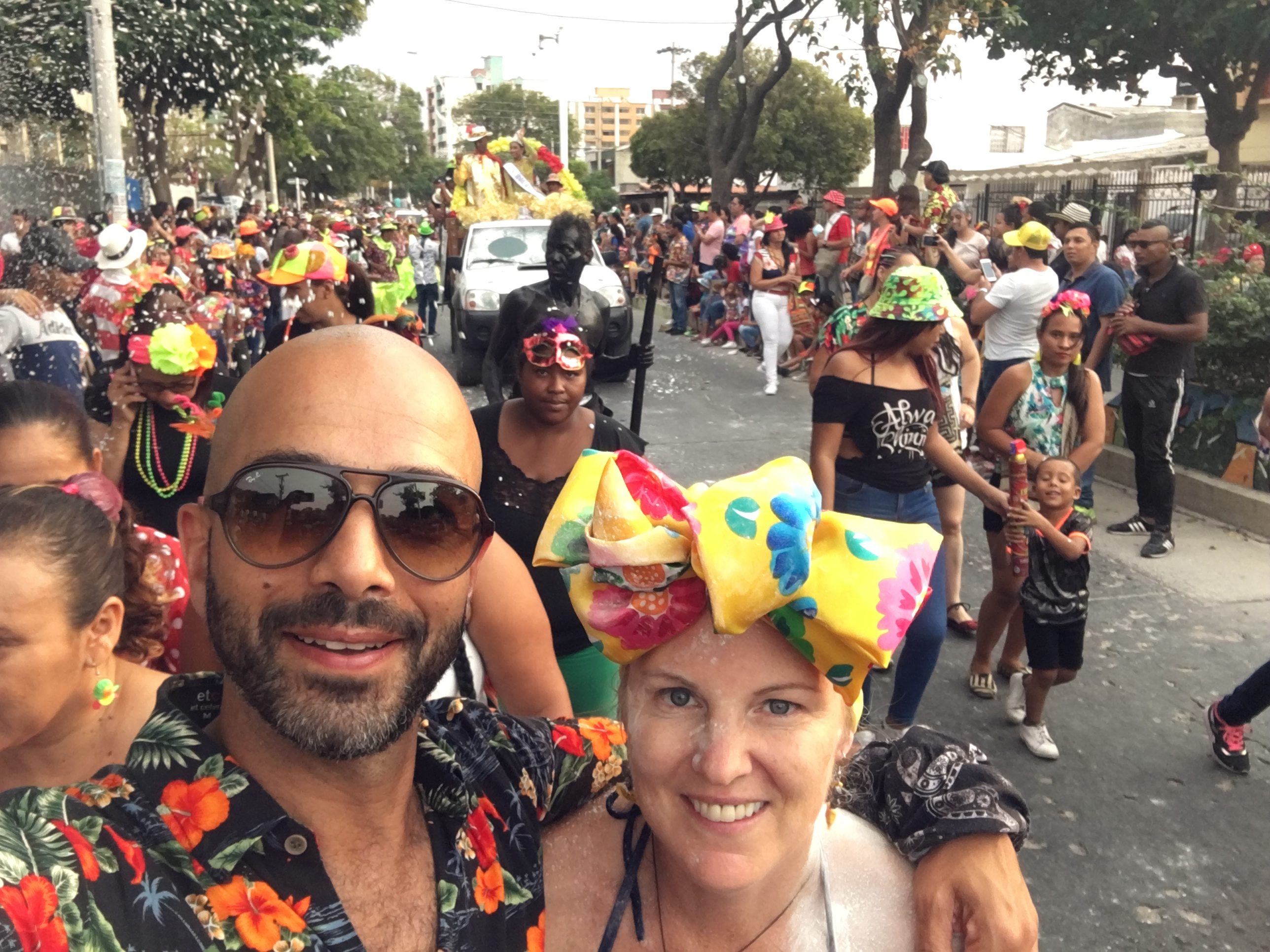 The main focus of our time in Santa Marta was around the work at the Tiempo de Juego foundation (https://tiempodejuego.org/). Day by day we built up relationships with the children and staff  and found out where we would  be of most benefit to the foundation. There was a timetable for sports, dance, music, football, leadership and other classes but there were no hard and fast rules for attendance. The foundation was more of a hub, or a community for the children of La – it was like a second home to them.

La Lucha was a poor  ‘barrio’ with a lot of the small houses nestled on a hill. The site of TDJ was basically a tiny courtyard, with an office and a toilet; and was adjoining the house of one of the staff Rosa, who also had 3 sons. She was like a second mother to all the children and I watched how each and every child embraced and kissed her when they arrived. That being said the whole place was like one big family, there was never a shortage of hugs, embraces, and unique greetings consisting of all manner of handshakes, fist bumps and the like. A lot of the kids spent most of their time together, either at school or at TDJ, so they were like brothers and sisters; you could sense the strong friendship  and love. Of course like every family there are fights, and I had to diffuse a few proper fisticuffs on the pitch but they were soon forgotten.

Rico absolutely loved going to TDJ – him and Tiana were an instant hit. The kids from TDJ had probably not met any of their peers from different countries let alone a different continent.  It was the first time the foundation had a family come to volunteer, and Camillo told me on our last day, he had been quite worried initially as it was a new experience for TDJ.  We all found our groove and different niches to help out. Becky and I ran a couple of evening English classes during our time there; Becky also had a student she taught English to everyday; it was the perfect way for Becky to learn Spanish as well.

Tiana ran two art classes; purchasing all the materials before hand and sharing her origami skills learnt in Japan with the Colombian kids. The classes started off with around 13, but as more people happened upon the class they also wanted to join as it was pretty unique. I watched as Tiana’s carefully prepared class was thrown out of kilter as she had about 25 kids asking for her attention as they were all at different stages of her craft lesson. Admirably  she coped very well, and the classes were a huge hit.

I helped out in all the sports and football classes which took place from Monday to Saturday and Rico accompanied me. Initially I worked with Camilo, one of TDJ staff, but also ran some classes on why own which was quite challenging, mainly due to the language barrier.

At times it was frustrating that I couldn’t coach football as I was used to, but I realised it really wasn’t about the game, but just being part of it and having the opportunity to kick a ball. There was so much raw talent and strength on display that could be harnessed, but the right channels and opportunities were needed to nurture them. The ethos for TDJ was  ‘futbol por la paz’ – football for peace – and keeping the kids  on the straight and narrow, getting them to believe in themselves, have some self worth, a sense of belonging and respect for each other were the main objectives. An afternoon with the ‘Coaches Across Continents’ (www.coachesacrossscontinents.org) team really hit home the importance of what we were doing and what role TDJ had in the children’s lives.

Carnaval is naturally one of the biggest dates in the calendar in South America, and Colombia is host to the second biggest carnival in the world in Barranquilla which is about an hour south of Santa Marta. The Tiempo de Juego dance troupe had been diligently a few routines for weeks prior to the Santa Marta carnival. On carnival day our family were on help marshall the TDJ  kids behind sound-system through the throngs of people along the Carnaval route. It was a phenomenal spectacle: different blends of local music from  Champeta to Cumbia to Reggaton peppered the air from different sound systems. in rich coloured outfits, everyone danced festive onlookers sprayed us with water and foam from canisters. This was the day Rico earned his stripes and became a true ‘Costeño’. At the start of the Carnaval he stood on the fringes of TDJ dance crowd as they performed their routines, and Becky and I  observed as he slowly learned the moves and inched his way into the mix. Within an hour he was in full flow, was busting some moves and had pretty much learnt the routines. Being a ‘gringo’ and not having the same clothes as the TDJ kids he really stood out, and onlookers found it quite amusing. He danced stop till our sound-system finally pulled off the route. The TDJ kids gave Rico some real kudos, and as the 4 of us dragged our weary bodies home with drum beats ringing in our ears, Rico still danced the whole way back. From that day on Rico received a heroes welcome whenever anyone greeted him at the foundation and the kids took great pleasure in teaching him a new move to bust out.

Our only contact arriving in Santa Marta was Patrick and his wife Nati, but within a few weeks we had built up a whole circle of such interesting and diverse friends and that opened so many doors for Colombian intel and opportunities. Through one of our friends, Mario I managed to secure a couple of Dj-ing gigs in a  bar where he was a bartender (https://www.facebook.com/charliesbarcolombia/).

Two young ladies that we lived us Harbour House guest house had been working on showcasing their artwork at Cafe Mestiza (http://www.saragottfriedsterling.com/). Their exhibition was only for one night and they invited Rico to showcase his work that evening as they loved his artwork and passion for drawing. Rico was stoked and spent the lead up to the exhibition conjuring up more of his zany cartoons whilst Becky framed and laminated them. The evening was a huge success, and  Rico was immensely proud to engage with people truly interested in his artwork and ideas, and as an added bonus even sold two pieces. A huge privilege and experience for an .

One afternoon completely out of the blue, I received a message from an old friend of mine and Becky’s -with whom we used to work with at the Petroleum Exchange in London- asking our whereabouts. It was completely random, seeing as we hadn’t spoken to him in 4 years. I responded that we were in Colombia, and his response was ‘where exactly?’ I was really perplexed and told him we were in Santa Marta, to which he responded that he also was, as part of a 12 day tour of Colombia, but just for the the night! I pinged him our location and as fate would have it he was staying one street away from us….what were the chances?! A few beers and a long overdue catch up was had until the small hours.

Five weeks passed quickly, and the kids were reluctant to leave TDJ. The days were packed from  trying to keep abreast of schoolwork, time at TDJ and the routine admin. My base level Spanish was passable, but we all benefitted with a few proper lessons from a teacher who came to our guesthouse. I found at  the end of each day I was so exhausted from a combination of the heat, the work and having to stay focused listening and conversing in Spanish non stop. Rico had really thrived in our time in Santa Marta, and for once Tiana had taken a backseat, although her grasp of the language especially the pronunciation was remarkable.

We hadn’t managed to do much in the way of exploring the area in that time, but we’d learnt a lot about the country and it’s people just by immersing ourselves in the culture and day to day life. Time to don our backpacks once more and go in search of adventure