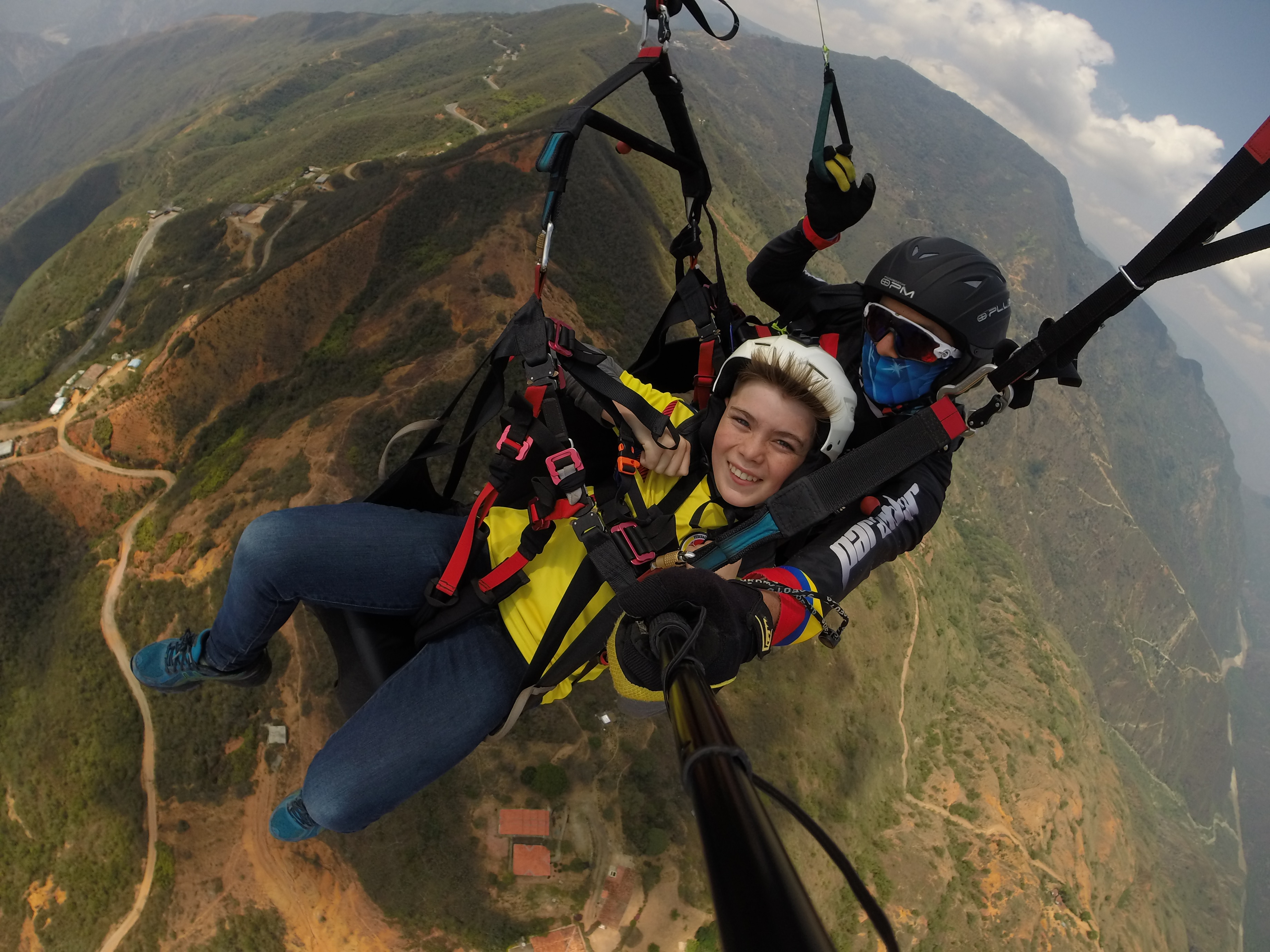 It was nice to see Rico take the box seat from Tiana and really thrive in an environment. His interaction with the kids at Tiempo de Juego was great to see, and I think after earning his stripes dancing at Carnaval he became a huge hit there, especially with some of the girls! He was particularly bleak to leave and really wanted us to extend our time working at the foundation.

As with all our long stays, it was sad to leave newly found friends, but it was time to actually see some of Colombia. Santa Marta itself didn’t really grab any of us, but the warmth and kindness of the people would never be forgotten. Asides from a few streets with nice restaurants and bars the rest of the town hadn’t endeared itself to us and it was literally a breath of fresh air to get back to nature away from the dust, litter, noise and edginess. We spent a couple of nights in a teepee in the mountain village of Minca, enjoying hikes and refreshing waterfalls, and also spent a day in the lush Tayrona national park.

Trouble in the terraces!

Historic  Cartagena further down the Pacific coast was the next stop for a few days where despite it’s beauty, we learnt a lot about its dark past relating to the slave trade. It was back to fast travelling and ticking off things to see and do; with this came its usual issues and stresses. There were a lot of long  bus journeys, but the upside was we got to see the vastly changing landscape and terrain unfold before our eyes. The scenery was breathtaking….this was the Colombia we had been anticipating.

Arriving in Bucaramanga in the morning after a long overnight bus journey, we  ventured into  the town in a daze to stretch out our legs and hunt down some food. I noticed a few locals walking around wearing football shirts of the local team Atletico Bucaramanga. A quick check revealed that they were playing in a couple of hours, and Becky suggested I should find a  bar and watch with some locals. On the way back to the hostel by pure chance we ended up outside the stadium which turned out to be a short walk from our hostel. Rico and I decided we would try and get a ticket and go to the game.

As we approached the stadium there were a fair few touts selling tickets. The first one we approached had certainly had a fair few pre match refreshments and slurred something about gringos and offered us a pair of tickets at a clearly over inflated price; we swiftly moved on and hung around another area outside the stadium assessing the situation and the touts. I found a more approachable tout and he showed me what tickets he had, and they were only slightly above face value. I asked him a couple of times if we were seated in a family friendly area opposed to with the ultras and he gave me his assurances we’d be safe. I paid him, and we headed off in the direction he pointed us in. After turning the corner we hit a single line of absolute nutters queuing to get in the stadium, and they were flanked by police on horseback keeping them in line. No shirts, heavily tattooed bodies and faces, and mohican haircuts seemed to be the look. I immediately thought we’d been had over by the ticket tout, as this looked the polar opposite of family friendly. Rico gripped my hand tightly as we walked past the tightly policed line of ultras snaking to the turnstile,  and we witnessed an unruly fan ushered back into line with the gentle persuasion of a baton by a policeman!  I didn’t want to risk us going in with this mob, so I said to Rico we’d maybe avoid the queue and wait till after kick off and see if there was a somewhere to stand away from this motley crew. I showed our tickets to a security guard and double checked the stand we were in and to our relief he steered us to another enclosure where we duly got in the queue with a more sedate bunch of people – panic over!

The game was fairly mundane, but the second half offered more entertainment…in the stands. I’m not sure what the catalyst was, but there was a huge fracas with some of the home fans and the police. Rico had never witnessed anything like it before, and seemed more transfixed on the various fights than the game itself. The police rough handled a few fans out of the ground, and there were a few more incidents before the final whistle.

This was the second game I had attended in Colombia – the first resulted in my friend, getting teargassed and hit with a baton by the riot Police for no reason whatsoever aside from them trying to flex some authoritative muscle. South American football, had thus far lived up to my expectations!

A couple of things that stood out for me in Colombia were the number of barber shops, and also the amount of carbohydrates with each meal.

I don’t think I’ve ever encountered a country where men have their hair cut so frequently – the boys at TDJ were always sporting a fresh cut or new tramlines in their ‘barnets’. You could barely walk a couple of streets without coming across someone that had a  chair and mirror set up and was snipping away.

As with all the countries we had travelled through, we preferred to eat what the locals ate, rather than dine at expensive tourist restaurants. The main meal of the day in Colombia was “Almuerzo’ – lunch, and we generally went for the “menu del dia’ – menu of the day – which consisted of a thick soup, followed by a main meal accompanied with a juice of sorts.

The soups were very tasty and generally had a lot of potatoes in with some sort of meat, but certainly not the choice cuts! The main meal would consist of  pork chop, or piece of chicken, and the rest of the plate would be loaded with carbs, not just one type, but at least three different types; platano, potatoes, fries, spaghetti, rice or even fried banana. There were no signs of any vegetables, aside from maybe a lonely slice of tomato for garnish. We soon figured out that just 2 meals we’re sufficient for the 4 of us, and there was always a post meal carb slump as our bodies digested lunch.

From Bucaramanga we travelled to the quaint town of San Gill where we based ourselves for  8 days. Rico’s birthday was during this time, and he reminisced over his birthday the previous year with all his pals at our house, but a day full of extreme activities including rappelling down a pretty high mountain, followed by a phenomenal paraglide over the Chicamocha Canyon cheered him up.

Medellin was next up and I particularly was fascinated by this city after learning about the atrocities it has suffered during the 80’s and early 90’s with Pablo Escobar’s cartel grip on the city plus it’s ongoing feud with the rival drug cartel of Cali. At one stage Medellin was the most dangerous place on the planet with 6,800 murders in 1991. It is still trying to heal the wounds of the traumas that occurred and trying to rebuild and reinvent itself. We were so impressed with the infrastructure; metro and cable cars, and in particular the amount of outdoor gyms, football pitches and the emphasis on sport in general. Medellin is a city of around 2.5 million people and is situated in a valley flanked by beautiful mountains. Boarding a cable car from the north of the city you rise above barrio of Santo Domingo and all of it’s tightly packed shacks Not long after, the denseness of habitation thins out until you are whisked over tree tops as far as the eye can see until the cable car finally stops in the majestic Park Arvi. The contrast from the city to forest in such a small space of time it amazing.

Easter was difficult for the kids, as they talked about all the fun times we had in South Africa during this time, either with friends visiting from England or family over at our house. We were situated in a small town called Salento in the heart of the coffee region, that was jam packed with locals there for ‘semana santa’ -the most important religious festival of the year. There was a real buzz to the place, and we enjoyed a few days being caught up in the festivities and hiking around the beautiful surrounds.

Whilst at Tiempo de Juego we made friends with a guy from Bogota, Nico, who was a filmmaker, and throughout our trip in Colombia he kept in contact giving up tips of places to go and areas to see. In Bogota he kindly let us stay in his girlfriend’s flat for our time there, and it was a little  haven for us – time to regroup enjoy some home comforts and prepare for a new country. Colombia has been very good to us in our 10 weeks, and the thing that resonated most was how genuine its people were and the amazing hospitality we’d received.