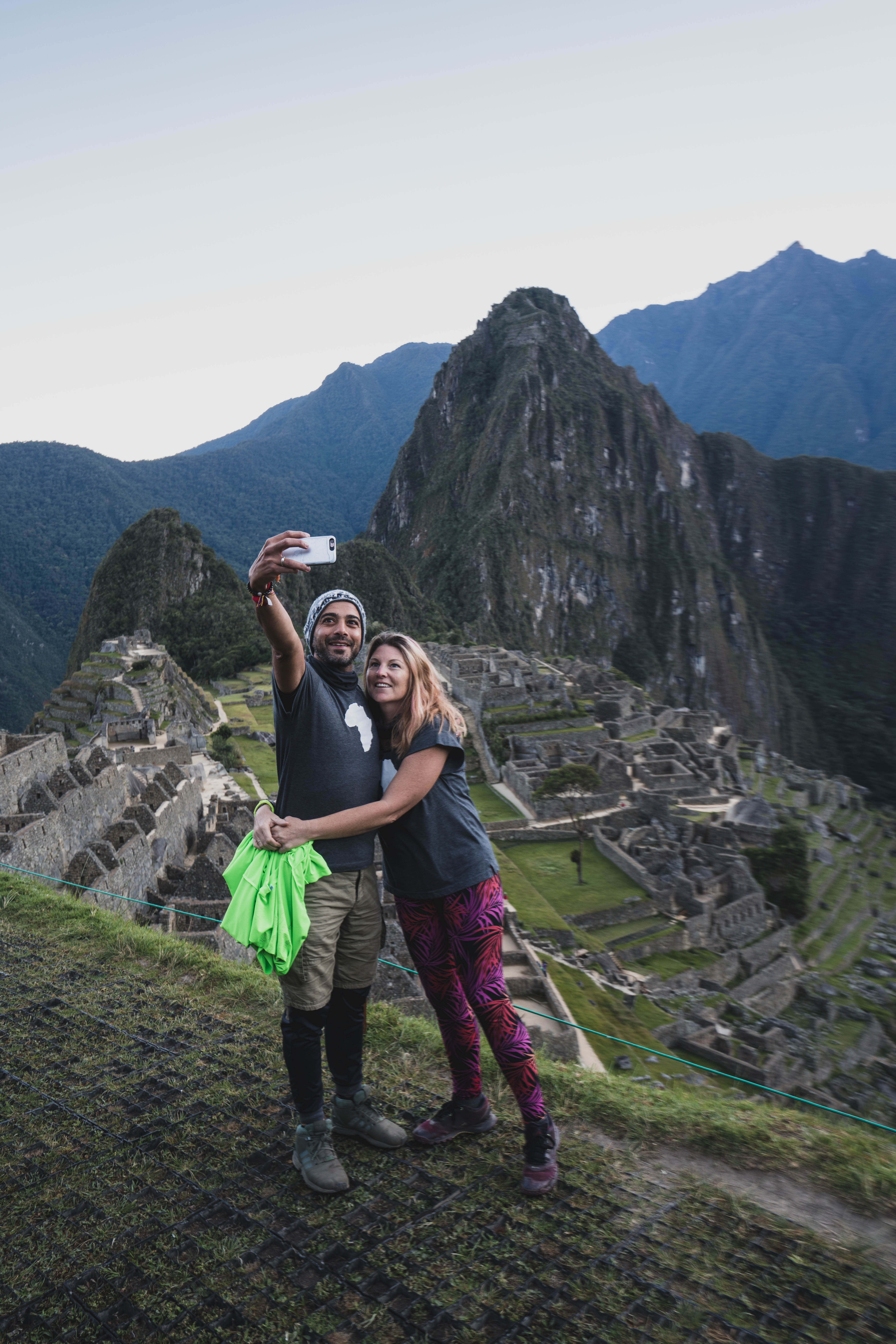 I felt sorry for the other couple that had paid for the Lares trek and had been paired up with us 4! We explained to the kids that the trek wasn’t cheap and this couple wouldn’t want to hear squabbling or moaning  over the next 4 days. To be fair the kids were in great form and we became great friends with Phyllis and David

A briefing with our our guide for the trek the night before, was followed by an very early pick up at 4:30am in the morning from our hotel in Cusco. As daylight started to break our van chugged its way into the countryside from the city and our first stop was at a local market.

We were eased into the trek with a relaxing couple of hours at the Lares hot springs – this probably would have been more apt at the end of our trek, but it was still very welcome. After this, lunch was served , and the tone was set as to how well we would be treated during the upcoming days.

Lunch was served in our ‘dining tent’: table and chairs; coca tea to start, soup, main course with a variety of 4 exemplary dishes, desert and more herbal tea. A regal feast, and this is how it remained for all the meals during our trek.

To say we were looked after was an understatement. Everything was taken care of, all we had to do was walk! We had a whole entourage; Juan Carlos our head guide, a chef, assistant chef, 2 local horseman and their 4 horses -it felt like we were going on some sort of expedition of grandeur. All of us were given tog bags, which were carried on horseback, and all we needed to carry were our day packs. Tents were set up for us each night, and we were given hot water bottles before bed as the nights were ice cold. Each morning we  awoke to a cup of hot coca tea, and a basin of hot water to wash, outside of our tent.

After breakfast we’d set off walking whilst the team would pack, load up the horses and then hot foot it past us in order to set up for lunch. Not that I’m a calorie counter, but generally after a big hike I’d lose weight, this would be the first one where I’d actually gain!

If glamorous camping is known as ‘glamping’ then this was certainly ‘glekking’!

The trek itself wasn’t difficult, but walking at this altitude was tough – we were ambling around 4500M which isn’t for sissys. Thankfully none of us suffered with altitude sickness.

Poor David and Phyllis were sporadically bombarded with Tianas’ verbal diarrhoea, as was the norm when we befriended people for more than a day, and I had one ear on what dark family secrets  she was telling them.

In Phyllis’s absence, David told us he planned on proposing to her the following day and wanted us to be part of it. My initial fear was that loose lipped Tiana would spill the beans but fair dues to her she didn’t.

David picked the most perfect spot – the pinnacle of our trek, with the most amazing view. A few tears were shed by us all; mine in sympathy in what awaited him in marriage (joke), and I jested that he had picked the perfect spot to propose – as it was all downhill from here, literally with our walk and metaphorically (joke #2). Becky also saw the funny side of it!

Fortunately for David he did the deed during the day, as poor Phyllis was very ill during the evening and the following day,  and needed to be  taken on horseback the rest of the way.

Our van met us at the end of our trek and we visited the Inca salt mines ‘Salineras de Maras’ before arriving at Aguas Calientes where we’d finally get to see Machu Picchu early the following morning.

Machu Picchu was the cherry on the cake of our trek. The images of these ancient Inca ruins are so well known, but when up close and amongst them they are so mystical and truly incredible.

The engineering feat of the Incas to build this village amidst the mountains was staggering. We sat and watched the sun slowly rise over the mountain before it illuminated this magnificent small Inca village and we walked down to explore the ruins in more detail. A fitting end to a perfect few days.