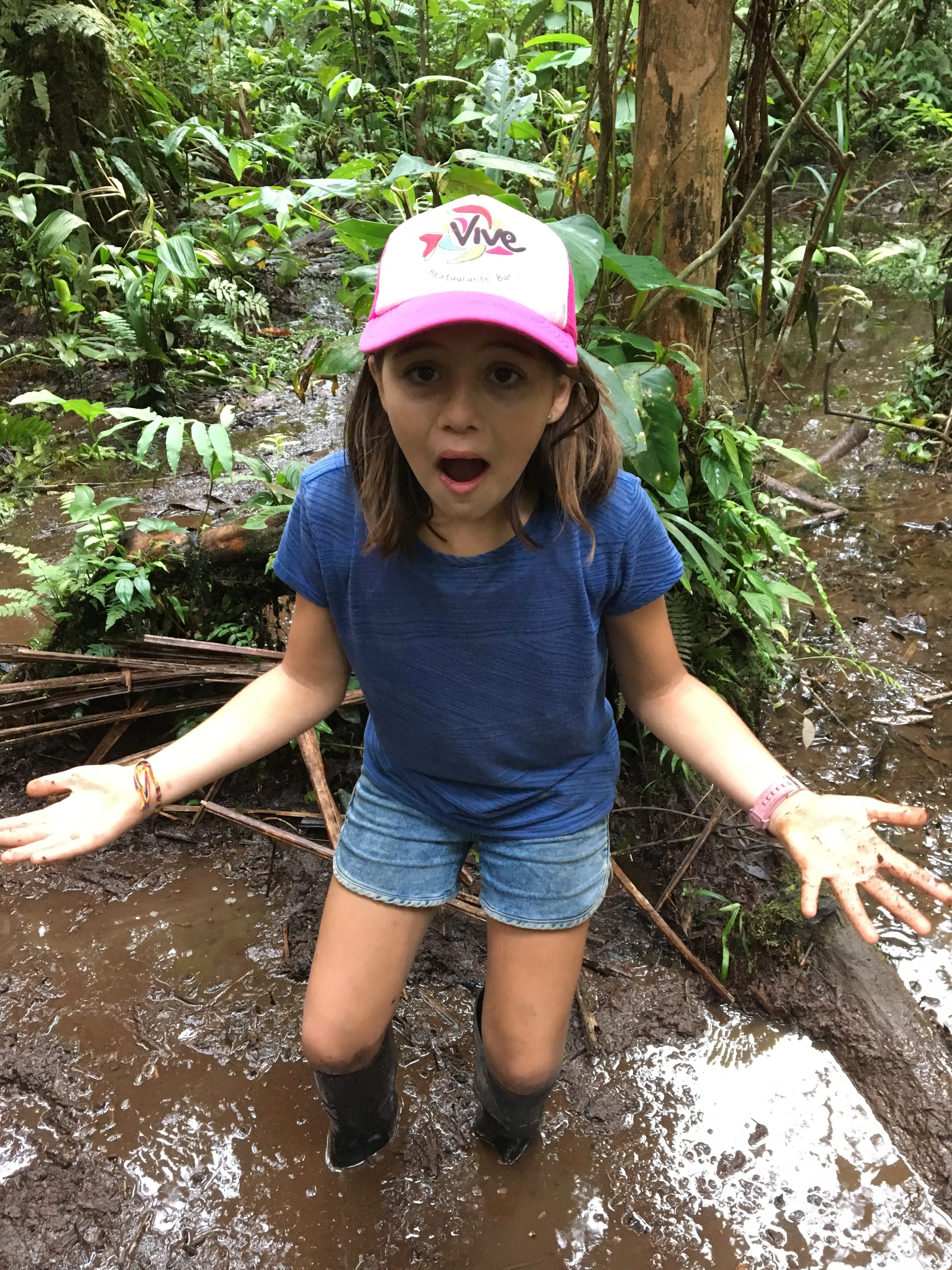 Getting high in Quito

It was a treat to board a metal bird again after so many buses; a short flight from Bogota took us to Quito, where we were greeted with rolling hills and mountains on our decent into the capital  city of Ecuador.

Exploring cities by foot had become a chore for us, and it was decided to keep our forays out more purposeful as there was a lot of travelling ahead of us. Quito, like Medellin in Colombia, closed some of it’s busier roads on Sundays in order to open them up to cyclists, runners, and any other forms of non motorised transport – so we joined the masses and hired some steel horses to pedal around the city and try and acclimatise to the 2850M altitude. Even walking up a short flights of stairs was tough, and our day trip to hike up the Cotopaxi volcano was going to be a real test.

The coach stopped on the way to Cotopaxi for us to purchase chocolate (90% cacao) and anything coca based (except the white powder!) in order to help us cope with the altitude we’d be experiencing. Distance wise the hike wasn’t bad, but the conditions and elevation were pretty tough. The terrain was lunar-esque and difficult to walk up – two steps forward and one back. added to that was the freezing cold temperature, the wind and the altitude. It was really difficult to breath, so we took it super slow, one slow step at a time. Becky and the kids stopped at the refuge shelter to defrost with some hot chocolate, and I carried on to the start of the glacier at 5000M.

Coming down on the other hand was quick and fun. Rico and I mountain biked part of the way, and he did exceptionally well to handle the fast gravelly road. During the ride  down, we were exceptionally lucky to see 12 condors in full flight circling around waiting for an opportune moment to pick on the carcass of a dead horse. To put it into context there are only around 170 Condors left in Equador, so what we witnessed was very rare.

No trip to Ecuador is compete without a trip to the equator line – ‘mitad del mundo’. It was fun performing the experiments to examine the different forces in play either side of the equator line and a good lesson for the kids in gravitational forces. We grabbed lunch in a local restaurant , trying to watch Barcelona V Liverpool whilst a pan pipe band serenaded the patrons, before sampling the local delicacy of cheese ice cream before heading back to our hostel.

Check out Tiana’s blog post of our trip to the equator: https://straightoutta.school.blog/2019/05/12/mitud-del-mundo-the-equator/

Rumble in the jungle – The Amazon

I drifted in and out of sleep as the  stuffy mini bus twisted and turned down the curves; sporadically waking to equalise my ears  as the bus descended from 2800 – 1500M.

Arriving as the sun started to rise, we patiently waited outside a small hotel for them to let us in. Eventually, a young guy stumbled from the property and opened the gate -using it as support as he  could hardly stand- mumbled something, then collapsed into a a little security hut at the front of the property and fell asleep. A cluster of about 20 empty litre bottles of beer explained his wobbly demeanour and answered our  question why our hotel wasn’t ready to receive us! Our driver took charge of the situation and packed us back on the bus and dropped us off at a Café to wait for the next coach for a further 6 hour trip to get to our starting point for our Amazon adventure.

We boarded the boat with our guide Romulou a native of the area, and  soon we were led into a magical world. The boat glided down the light brown river pathway flanked by rich green banks of lush trees with such diverse foliage that met the sky and plunged into the brown river water.

As the boat snaked around the smooth bends of the river a new scene unfolded with each turn, exposing more rich green jungle artistry – it was truly a magnificent. We were treated to sights of various troupes of squirrel, yellow handed titi and howler monkeys, but the ‘piece de la resistance’ was a sloth, nestled in a bough of a tree letting life pass it by. Arriving at our small, very rustic, riverside lodge, we were shown to our rooms. Ours was ‘#8 Tarantula’ and I truly hoped that the sign was as close as we’d get to one in the room, but my fears were later justified….!

We kitted up for a night walk by torchlight and we didn’t have to venture far before we were greeted by the jungle’s inhabitants. First up were 2 tarantulas nestled in a tree. Spiders are one of my  biggest fears, but to be honest once up close and personal these tarantulas weren’t as bad as I had imagined, and the fact they weren’t moving made it more bearable! As we ventured deeper in, every step produced a new set of eyes from somewhere. There were some truly scary arachnid brethren. One hand sized spider perched on a leaf seemed quite aggravated by our presence and lifted a couple of legs in protest. Romulou told us to stand back and get past as quick as possible as it could jump and bite – resulting it a lot of pain for around 7 hours. A swift exit from the area was required.

Monkey frogs, millipedes, butterflies and bats all made an appearance. A sudden cry from Tiana started the trend for all of our group to start hopping about and slapping ourselves as ants attacked us, presumedly falling form the overhanging foliage, and climbing down our necks and up our trousers – this was our cue to leave our night jungle safari!

Mosquito nets were unrolled and we bedded down for the night, lulled to sleep by the chorus of the frogs and cicadas.

We awoke to the sounds of the soft jungle rain and tropical birds in song. Tiana opened our bedroom door and let out a scream – a tarantula scurried into our room and lay by the corner of the wall pensively. I picked up an exercise book thinking I could usher it out, but in reality it was a token gesture, as I  was going no where near it! Rico bravely grabbed the book from me and after a couple of attempts managed to flick it outside onto the walkway. Romulou appeared after hearing our shrieks and calmly picked up our 8 legged furry intruder and relocated him…welcome to the jungle!

A short boat trip took us downstream to visit a local tribe where we learned how to make yuka bread; digging, washing, grating, cooking and finally eating the fruits of our hard earned labour.

Another night walk led us to some close encounters with some beautiful snakes, much to the distress of one of the ladies in our group. She let out frequent  shrieks for the remainder of our walk as the torch lights  transformed every branch and vine into a snake for her paranoid mind. Another outstanding day in this magical place.

I awoke early, at 5am, and instead of reaching for my phone, which was my normal bad habit, I just lay in bed and tuned my ears to the last of the night orchestra from the jungle. As the sun rose, the insects piped down and passed the microphone over to the birds who lulled us into the new day.

No trip to the Amazon could be complete without seeing a piranha – and we were duly rewarded. Out first foray into fishing for one of the world’s notorious fishes proved fruitless, but Romulou took us to another spot, and we soon managed to hook a few out. It was such a buzz to fish for, and actually catch piranhas in the Amazon river. Romolou demonstrated with a leaf, the power of it’s bite… and it certainly didn’t disappoint, making the most perfect cut…the satanic part of me would have loved to put a finger in it’s mouth!

As our boat traversed back through the twists and turn of the river, we were followed by two pink dolphins…a fitting end to a mesmerising few days.

Leaving the jungle was sad, our little adventure had ended and suddenly we were back in the real world and thoughts immediately turned to communication with the outside world, and this magical paradise rich in animal and insect life seemed a distant memory. The bus took off and within 20 minutes my phone lit up, peppering me with banal messages and news. I’d forgotten that is was the penultimate day of the premiership and predictably my team  Arsenal had let me down again and squandered the chance of Champions league football next season. I was keen to turn around and head back to the jungle.

2 thoughts on “#47 Ecuador – Arachnids and Altitude”