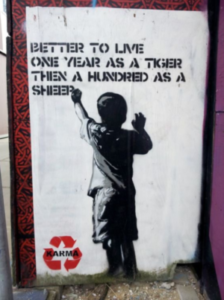 The countdown chart on our wall was down to one page. Only April left; down to single digits until we vacate our home and officially become nomads.

I generally get nostalgic, but with gravity of what we were doing I was desperately trying not to, as every time I did lament on the good times in our house it was swiftly superseded  with the fear of the unknown we were plunging into.

The house had emptied at a steady rate over the last 6 weeks. Each time the kids came home from school the house was a few items lighter.  The animals started to pick up on it and Scooby became very anxious and despite my love/hate relationship with the dog, I felt sorry for her, even to the point when I buckled and let her sleep in the bed. Colin, started to lose his  various spots around the house where he lazed about in the day following the sun. Couches gone, beds gone..he got a bit grumpy and resorted to spending nights out and getting in fights with the ginger two houses away. At least he found a good channel to release his frustration, even though picking on gingers* was an easy target.

Packing was stressful, but doing twelve  things at once satiated my ADD which was in overdrive. Becky was a lot more efficient than me and had to reign me in a few times and get me to finish one task before starting another…or making a coffee, or putting another record on, or checking twitter etc etc…yes, it’s that bad.

We squeezed in a few days away over Easter with some of Rico and Tiana’s school friends and their families. On route we dropped Scooby with Becky’s mother, and after our break decided we’d leave her there as the ensuing chaos in the house would unsettle her further. The kids were very upset when we returned home and even I felt the house was empty without the annoying mutt. This was the first of a lot of tearful goodbyes for the kids. 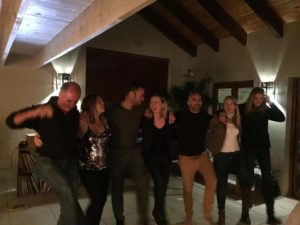 Obviously with leaving a place comes the obligatory leaving do’s and unfortunately Becky and I don’t do things by halves. We had one final bash at our house which culminated in a sunrise finish and then had a 40th party bolted on the back of  that the next day…only a 4:30 am finish! Thankfully I’m pretty resilient like that and my hedonistic training at university can still be called upon occasionally. With so much to do and so much on my mind, my body was conditioned to around  5 hours  sleep a night, so I was ok.

I have to admit it was sad having our last blast in our house as we’d had so many great shindigs there over the years. There was still time for one last party and it was fitting that it was Rico’s birthday party; the last time he’d get to spend proper time with his school mates. I’m not generally a fan of kids parties…loads of kids buzzing on sugar tearing around our house causing havoc, but this party was pretty cool, and Rico had the time of his life and even let his sister join in.

All my music equipment had been kept out especially for Rico’s party, so now it was over, I had to box up my turntables and vinyls. As any of you vinyl aficionados would know, each and every record purchased conjures up  a memory from a certain period of your life and you can pretty much remember which record shop or market you purchased the vinyl from, and for geeks like me you can even remember what it cost. So, much to the annoyance of the neighbours, my packing was done to a backdrop of early 90’s Jungle, classic UK Indie and  Acid House from the late 80’s.

*I’m not a gingerist in anyway. I do have ginger friends!!